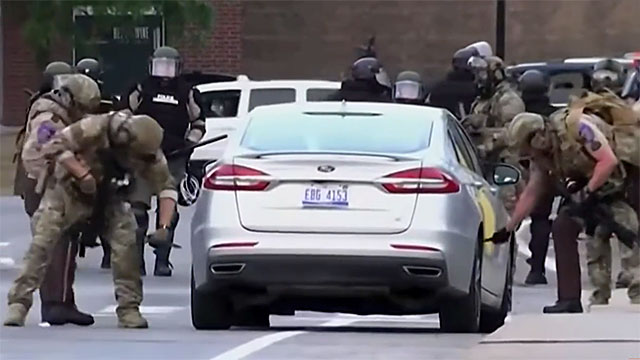 Video footage discovered by Mother Jones shows what appears to be police officers slashing the tires of several cars parked in Minneapolis over the weekend.

After long nights of tear gas and rubber bullets, some protesters, news crews, and medics in Minneapolis last weekend found themselves stranded: The tires of their cars had been slashed.

In a city upended by protests about police brutality after the death of George Floyd, many assumed protesters were to blame. But videos reveal a different culprit: the police.

In the videos, officers puncture tires in a K-Mart parking lot on May 30 and a highway overpass on May 31. Both areas briefly turned into police staging grounds near protest hot spots.

The officers appear to be state troopers or county police, though it’s not clear from the videos. Neither the Minnesota State Patrol nor the Hennepin County Sheriff’s Office responded to requests from Mother Jones. The Minneapolis Police Department and Minnesota National Guard denied involvement.

The Minneapolis Star-Tribune reported after the Mother Jones story that a spokesman for the Department of Public Safety acknowledged State Patrol troopers “strategically deflated tires in order to stop behaviors such as vehicles driving dangerously and at high speeds in and around protesters and law enforcement.”

The spokesman, Bruce Gordon, added vehicles “that contained items used to cause harm during violent protests” such as rocks, concrete, and sticks were targeted.

“While not a typical tactic, vehicles were being used as dangerous weapons and inhibited our ability to clear areas and keep areas safe where violent protests were occurring,” said Gordon.

Knotz said the deputies got their directions from the state-led Multiagency Command Center [MACC], which has been coordinating law enforcement during the numerous protests since the death of George Floyd on May 25.