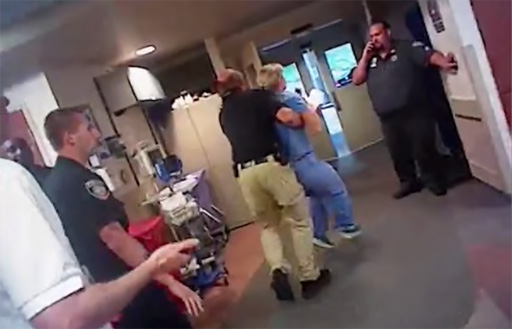 The Washington Post is reporting the story of a police officer who assaulted a nurse because she refused to allow the officer to draw a patient’s blood without a warrant.

By all accounts, the head nurse at the University of Utah Hospital’s burn unit was professional and restrained when she told a Salt Lake City police detective he wasn’t allowed to draw blood from a badly injured patient.

The detective didn’t have a warrant, first off. And the patient wasn’t conscious, so he couldn’t give consent. Without that, the detective was barred from collecting blood samples — not just by hospital policy, but by basic constitutional law.

Still, Detective Jeff Payne insisted that he be let in to take the blood, saying the nurse would be arrested and charged if she refused. Nurse Alex Wubbels politely stood her ground. She got her supervisor on the phone so Payne could hear the decision loud and clear. “Sir,” said the supervisor, “you’re making a huge mistake because you’re threatening a nurse.”

Payne snapped. He seized hold of the nurse, shoved her out of the building and cuffed her hands behind her back. A bewildered Wubbels screamed “help me” and “you’re assaulting me” as the detective forced her into an unmarked car and accused her of interfering with an investigation.

According to additional reports, present at the time were University of Utah police & Department of Public Safety officers, who did not intervene.

WATCH: Shocking footage shows a Utah nurse being arrested for refusing to give a patient’s blood to police pic.twitter.com/tVcc2WUBoi