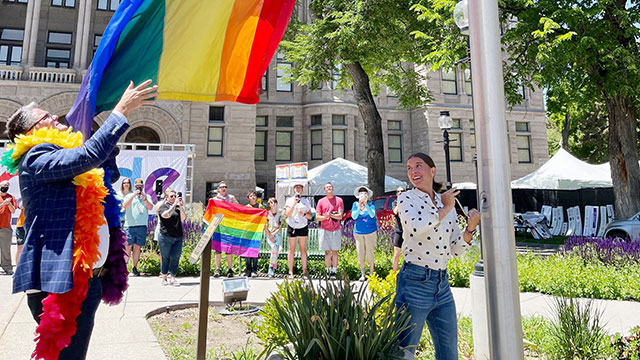 Utah’s Governor Spencer Cox issued an official declaration recognizing June as LGBTQ+ Pride Month. He is believed to be the first governor of Utah to issue such a proclamation.

“We must encourage relevant and vital conversations about what it means to love each other, understand our differences, and support our LGBTQ+ friends and family members,” reads the declaration from Cox.

“We can strengthen resilience in the LGBTQ+ community through family and community inclusion and by providing access to help, and giving them our support, respect, understanding, and friendship.”

Here in Utah, we strive to create a culture of hope, love, understanding, and respect by celebrating our common humanity.

In my quick search, I can find no record of prior Utah governors issuing #LGBTQ Pride proclamations.

Happy #PRIDE Month Salt Lake City! Raising the Pride flag to fly above City Hall is a favorite tradition and I’m so glad Pride Week is here to support the valuable programs of the @utahpridecenter, which are critical to our 🏳️‍🌈LGBTQIA🏳️‍⚧️ community #utpol pic.twitter.com/dasLVqwMjS