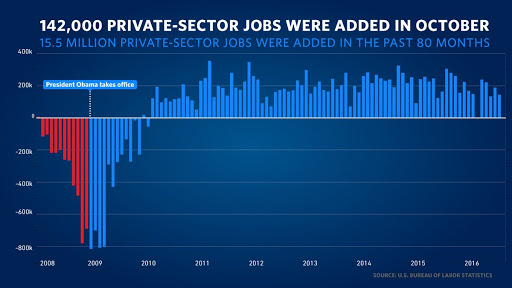 This should be welcome news for the Clinton campaign as we head into the final weekend of the presidential race. Wages up, unemployment down, and 15.5 million jobs added in the past 80 months.

The Bureau of Labor Statistics reports that the U.S. economy added 161,000 jobs in October.

Additionally, the numbers show hourly earnings have jumped 10 cents over the previous month. That accounts for a 2.8% rise over the past year, the fastest annual wage growth since the end of the recession.

In total, that’s 44,000 additional new jobs over those two months.

The unemployment rate ticked down slightly, back to 4.9 percent.

With unemployment moving further down and wages increasing, as Obama enjoys 54% approval ratings, this can only be seen as good news for Hillary Clinton.