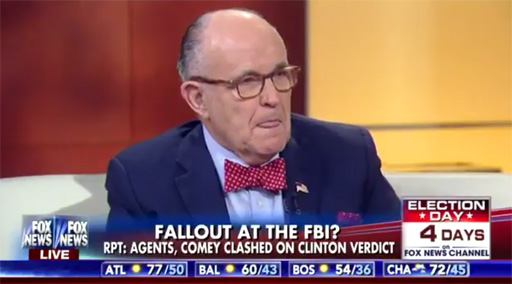 During a television interview today, Donald Trump surrogate Rudy Giuliani admitted he and the Trump campaign have been receiving leaked information from inside the FBI for months, including the agency’s plan to review additional emails found on a laptop shared by Clinton aide, Huma Abedin.

The former New York City mayor and Trump surrogate has recently dropped a series of hints that he knew in advance that the FBI planned to look at emails potentially connected to Clinton’s private server. The agency discovered the messages while investigating former Rep. Anthony Weiner (D-N.Y.) for allegedly sexting with a minor. (Weiner’s estranged wife, Huma Abedin, is a top aide to Clinton.)

Giuliani has bragged about his close ties to the FBI for months, mentioning in interviews that “outraged FBI agents” have told him they’re frustrated by how the Clinton investigation was handled. And two days before FBI Director James Comey announced that the agency was reviewing the newly uncovered emails, Giuliani teased that Trump’s campaign had “a couple of surprises left.”

“You’ll see, and I think it will be enormously effective,” he said in an interview with Fox News.

All of this has led to suspicion that someone in the FBI is leaking information to Giuliani and the Trump campaign. The Daily Beast’s Wayne Barrett explored those suspicions on Thursday, detailing how Giuliani’s ties to the agency date back to his days as a U.S. attorney in the 1980s.

Giuliani confirmed that notion Friday during an appearance on “Fox & Friends.”

“I did nothing to get it out, I had no role in it,” he said. “Did I hear about it? You’re darn right I heard about it, and I can’t even repeat the language that I heard from the former FBI agents.”