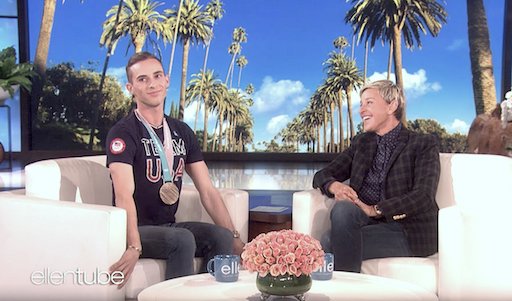 Olympic figure skater Adam Rippon sat down with Ellen DeGeneres today to talk on a multitude of topics including his not winning the gold medal in his event.

Adam countered the question by saying just by appearing on ELLEN – which he’s wanted to do for at least 27 of his 28 years on the planet – he feels like he’s having a gold medal moment.

Ellen did inquire as to Adam’s current “celebrity crushes,” and Adam’s first response was Jake Gyllenhaal is a “solid choice.”

I think we can all agree there.

He added that he’s recently shifted from Harry Styles to singer Shawn Mendes who he’s been “sleeping on” (but not with).

Ellen’s advice was to possibly look in the “gay men” category and he might find more success there.

In the second clip, Adam shares why he didn’t take a chance to talk with Vice President Mike Pence about his positions on so-called “conversion therapy.”

Mainly, Adam was busy getting ready for the Olympics. But he added that he feels that conversation is one that should be had by those who have been affected by Pence’s harmful policies.

He also announces his fund raising efforts in conjunction with GLAAD to help empower LGBTQ youth because, “I want people to be accepted exactly as they are.”

From his fundraising page:

This year, I attended the 2018 Winter Olympics in PyeongChang as an openly LGBTQ American athlete. I’m proud to have represented my country authentically as exactly who I am. I want others to be able to show up to life exactly as they are. This is why I’ve started a fundraiser for GLAAD – because they are fighting for a world where every LGBTQ young person can be accepted and loved exactly as they are.

I want to give back to GLAAD by raising money to support their LGBTQ youth programing. GLAAD’s research uncovered that 20% of young people ages 18-34 identify as LGBTQ, and because of this they’ve created several programs that empower LGBTQ youth to tell their stories, produce dynamic web content and events, and receive high-level advocacy and media training. GLAAD’s youth programs foster courage, confidence and acceptance.

Will you join me to advance equality and accelerate acceptance for LGBTQ youth? Donate now and help make a difference. Donating through JustGiving is simple, fast and totally secure. Once you donate, they’ll send your money directly to the charity. So it’s the most efficient way to donate – saving time and cutting costs for the charity. 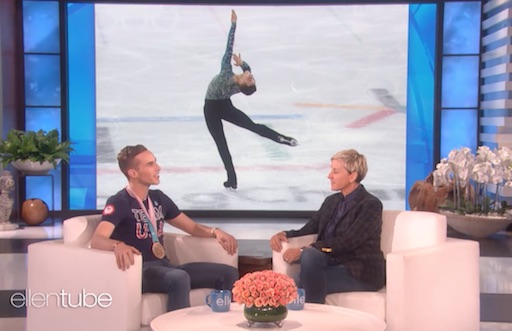