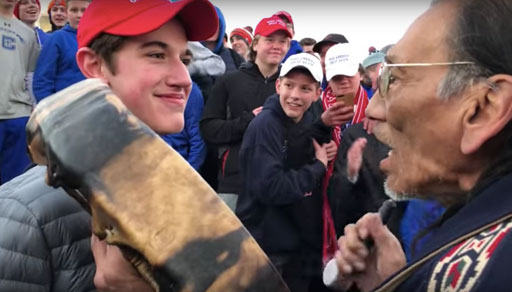 Covington Catholic High School is the only Catholic school in the diocese, so the the church is definitely getting involved.

Thankfully, expulsion is on the table.

The Roman Catholic Diocese of Covington, along with the school, acknowledged the situation Saturday afternoon, saying the matter is being investigated.

Laura Keener, of the diocese, released the following statement:

“We condemn the actions of the Covington Catholic High School students towards Nathan Phillips specifically, and Native Americans in general, Jan. 18, after the March for Life, in Washington, D.C. We extend our deepest apologies to Mr. Phillips. This behavior is opposed to the Church’s teachings on the dignity and respect of the human person.

“The matter is being investigated and we will take appropriate action, up to and including expulsion.We know this incident also has tainted the entire witness of the March for Life and express our most sincere apologies to all those who attended the March and all those who support the pro-life movement.”

In related news, it turns out these hateful brats aren’t the only problems in Covington, Kentucky.

In December, former Covington Catholic High School basketball player Jacob Walter held a woman down and raped her until she bled according to the Boone County Sheriff’s Department.

He was arrested and faces three felony charges: One of rape and two of sodomy.

This is some high school, huh?

Boone County deputies say Jake Walter, a one-time Covington Catholic basketball standout, held a woman down this weekend and repeatedly raped her until she bled.

"Walter dismissed the victim by laughing at her and telling her that she would be fine." https://t.co/mOhlgoFOMj pic.twitter.com/lH3pXgj9N5— WCPO (@WCPO) December 12, 2018