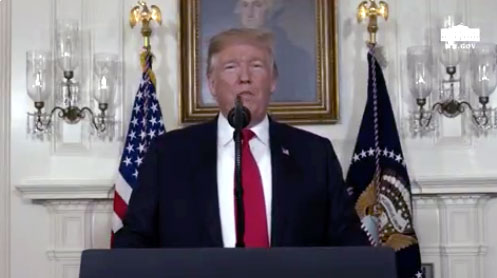 Donald Trump, in a national address from the White House, offered a temporary extension of protections for some undocumented immigrants in exchange for $5.7 billion to fund his beloved wall.

In casting the proposal as a compromise, Mr. Trump sought to shift pressure to Democrats to end the government shutdown.

The president, delivering a 13-minute address from the White House, said he would extend the legal status of those facing deportation and support bipartisan legislation that would allow some immigrants who came to the United States illegally as children, known as Dreamers, to keep their work permits and be protected from deportation for three more years if they are revoked.

“That is our plan,” Mr. Trump said. “Straightforward, fair, reasonable and common sense with lots of compromise.” The proposal, Mr. Trump said, was intended to “break the logjam and provide Congress with a path forward.”

But he reiterated his demand for $5.7 billion in funding for a border barrier, and Speaker Nancy Pelosi said ahead of his remarks that she considered his proposal a “nonstarter,” in part because it offered no permanent pathway to citizenship for Dreamers.

I agree with Pelosi. If he wants a permanent wall, then we want permanent protections for the DACA Dreamers.

It’s worth noting that Trump himself started the issue with DACA. So, now he’s merely offering a temporary solution for a mess he made.

As expected, President Trump offered Democrats temporary protections for so-called “Dreamers” in exchange for border funding. House Speaker Nancy Pelosi has signalled that the Democrats will reject the proposal. https://t.co/w1zo5dcUuy

What is original in the President’s proposal is not good. What is good in the proposal is not original. Democrats will vote next week to add additional border security funding for ports of entry, advanced technology for scanning vehicles for drugs & immigration judges.

It was President @realDonaldTrump who single-handedly took away DACA and TPS protections in the first place—offering some protections back in exchange for the wall is not a compromise but more hostage taking.

DACA recipients and federal workers are not bargaining chips. It’s time to reopen the government.

Trump ordered the end of DACA and TPS. Then he shut down the government. Now he’s holding federal workers hostage, saying he’ll temporarily give back what he took away—only if we give him a pointless, ineffective wall he falsely promised Mexico would pay for. This is a bad deal.

Trump’s almost impossible proposition: he wants a PERMANENT wall for a TEMPORARY extension for Dreamers and TPS recipients.
(Or $ 5.7 B for 230 miles of new wall/metal barriers for extending DACA and TPS for 3 years.)
It seems unfair. Why not permanent for permanent?

Trump stole DACA protections from all the Dreamers. Now he wants us to give him a wall in exchange for 3 years of deportation protection so he can deport them later when it’s finished.

Trump created this crisis. It’s his to fix.