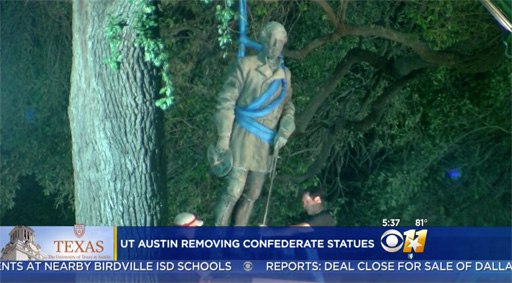 The University of Texas at Austin is moving all statues of Confederate leaders from campus grounds to the Dolph Briscoe Center for American History where they belong.

The monuments “have become symbols of modern white supremacy and neo-Nazism,” the university’s president said.

The University of Texas at Austin joins the growing list of institutions and cities across the country removing statues that honor leaders of the Confederacy.

“Last week, the horrific displays of hatred at the University of Virginia and in Charlottesville shocked and saddened the nation. These events make it clear, now more than ever, that Confederate monuments have become symbols of modern white supremacy and neo-Nazism,” Fenves wrote in a letter to the UT community.

Fenves, in his letter, noted that the statues were “erected during the period of Jim Crow laws and segregation.” The statues “represent the subjugation of African Americans,” he said. “That remains true today for white supremacists who use them to symbolize hatred and bigotry.”