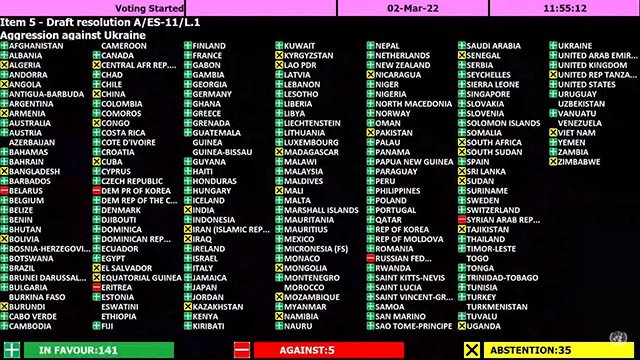 The United Nations General Assembly has approved a non-binding resolution condemning Russia for invading Ukraine and demanding that it withdraw its military forces.

JUST IN: The U.N. General Assembly voted to approve a resolution condemning Russia’s invasion of Ukraine and demanding an immediate withdrawal of its military forces.https://t.co/RF07LWhQbB

The vote came after a series of speeches during which the majority of countries called on Russia to end the violence in Ukraine, which has continued for nearly one week.

Sergiy Kyslytsya, the Ukrainian ambassador to the U.N., urged countries to vote in favor of the resolution in an emotional address that ended with applause from the chamber.

“It’s already clear that the goal of Russia is not an occupation only. It is genocide,” Kyslytsya said.

The resolution was passed by a lopsided vote of 141 to 5 with 35 abstentions.

In historic “Uniting for Peace” session, #UNGA adopts resolution demanding that the Russian Federation immediately cease its use of force against Ukraine and withdraw its military forces. https://t.co/xWc4QO8ruV pic.twitter.com/NZ5xG7Cfu2

141 countries voted in favour of this resolution against Russian aggression in #Ukraine.

It is a clear message that we: