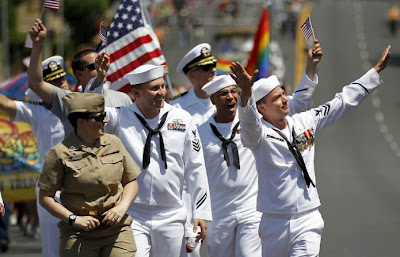 Following a historic week of marriage equality victories, the United States Navy, Region Southwest has authorized active duty Navy servicemembers under its command to wear their uniforms in the San Diego LGBT Pride Parade on Saturday, July 13 at 11 am.

For the third year, servicemembers are invited to participate in the Military Contingent which leads the San Diego LGBT Pride Parade.

Over 300 servicemembers are expected to participate, either in uniform or in a branch specific T-shirt.

“San Diego has a strong military presence and a large LGBT community, and it is important to our LGBT servicemembers that we honor their full identity and service to our country. We are grateful to the Navy Region Southwest command for extending their support to our event and to these courageous servicemembers,” said Stephen Whitburn, San Diego LGBT Pride General Manager.