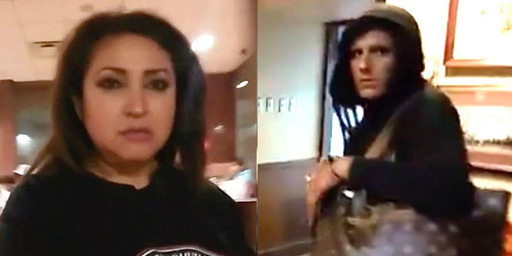 A transgender woman using the restroom at a Los Angeles Denny’s restaurant found herself being harassed by a wanna-be Republican Congressional candidate who broadcast the encounter on Facebook Live.

Jazmina Saavedra, a Republican running to represent California’s 44th Congressional district, clearly thought she was going to make some kind of a name for herself in Trump Land by attacking transgender people.

Armed with a selfie stick to make sure her face was clearly seen and proudly sporting her Trump sweatshirt, Saavedra barged into the bathroom attacking the unidentified woman. As she enters the restroom, the restaurant manager is already inside the ladies’ restroom, outside the stall where the trans woman is trying to do her business in peace.

“Why are you using the ladies’ room?” Saavedra demands to know. The trans woman in the stall shouts back, “You guys are harassing me…you’re invading my privacy,”

“You’re invading my privacy because I’m a woman!” Saavedra responds.

As the manager removed Saavedra from the restroom, the would-be politician candidate yells, “You violated my rights! You’re sick. Stupid, sick!”

As the transgender woman was exiting the restaurant she addressed Saavedra asking, “Excuse me, I was using the toilet, how was I invading your privacy? Why are you singling me out, lady? And I’ve seen you yesterday following me.”

“Next time use the men’s room,” Saavedra hissed back. “Or nobody’s room. A transgender room.”

The Democratic congresswoman Saavedra is attempting to unseat is Rep. Nanette Diaz Barragan, who denounced Saavedra’s actions in a statement: “I was appalled by the treatment that this woman received for simply trying to use the restroom. Everyone has the right to their own identity, and the right not to be discriminated against for who they are.”

Behavior like this from a Trump supporter isn’t news to those who have watched the Trump/Pence administration attack and dismantle rights and protections for transgender individuals. This includes:

• Making changes to prison guidelines on where to house trans prisoners

The Advocate contacted Saavedra who held tight to her declaration that she felt she was in danger.

“I was feeling afraid of being inside the bathroom with a man,” she told The Advocate. “I didn’t know he was gay, I just heard the voice was a man. Another customer approached me and said that they were scared to go into the restroom because there was a voice of a man inside, and so I told the manager.”

As has been widely covered by the press, there has never been a reported incident of a transgender person attacking or harassing anyone in a bathroom anywhere in the country. Ever.

Even in this recorded video, it is Saavedra who is stalking the trans woman.