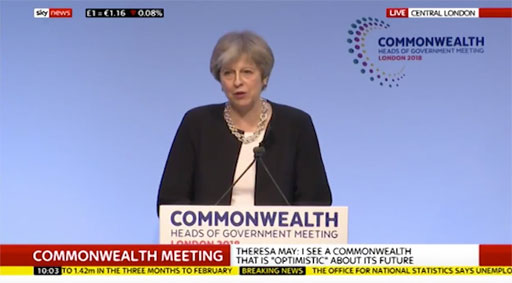 UK Prime Minister Theresa May, speaking at a week-long summit meeting of the Commonwealth, a 53-country network of mostly former colonies, said she regrets the anti-LGBT laws enacted years ago and called for their reform.

“I am all too aware that these laws were often put in place by my own country. They were wrong then and they are wrong now,” May said.

“As the United Kingdom’s Prime Minister I deeply regret both the fact that such laws were introduced and the legacy of discrimination, violence and even death that persists today.”

Currently, 37 of the 53 member nations of the Commonwealth outlaw same-sex relations.

Last week, out UK diver Tom Daley addressed the issue at the Commonwealth Games in Australia after winning the 10K meter synchronized diving event with his partner Dan Goodfellow.

This is what we wanted to see in #CHOGM2018. Strong words from UK PM Theresa May @Number10gov on regret and calling out those countries who were and still are wrong. There is still SO much to do across the Commonwealth for LGBT+ equality. #QueerCommonwealth 🌈 pic.twitter.com/5JpPEOKvL5