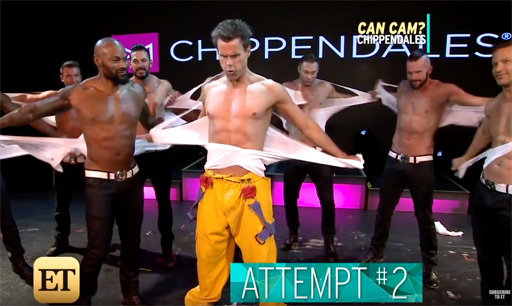 Super model Tyson Beckford, currently headlining as the Celebrity Guest Host at Chippendales in Las Vegas, issued a challenge to Entertainment Tonight host Cameron Mathison to come take “the Beckford boot camp” to see if the TV host could cut it as a Chippendale.

Aided by Chipps cast mates, Tyson taught Mathison through secrets of being a Chippendale.

Apparently, “the shirt rip” is not quite as easy as it looks. Fortunately, Mathison had expert backup with Beckford and the men of Chippendales.

Then there’s the pre-show workout before Tyson brought Mathison onstage before a live audience to show-off a bit of what he’d learned.

Tyson Beckford’s run at Chippendales has been extended due to popular demand, so head out to Vegas and check him and the Chipps out at the Rio Hotel and Casino.