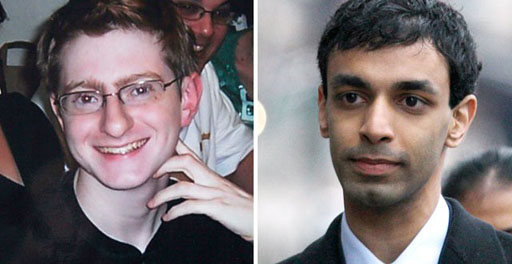 Folks in the LGBT news world are stunned.

The appellate court sided with Ravi’s attorneys who had argued he never should have been charged with bias crimes and his convictions should be reversed. The court also ordered a new trial saying Ravi could not have received a fair trial as the bias evidence “permeated the trial.”

“It’s far from over,” Ravi’s attorney Steven Altman said Friday morning. “I’m extraordinarily pleased with the decision. I haven’t spoken with the Ravi family yet, but I can only imagine they’re pleased as well.”

The appellate decision arrives four years after Ravi’s conviction on several counts of bias intimidation and other charges following a highly publicized trial in New Brunswick, which put a national spotlight on cyber bullying.

Clementi, of Ridgewood, who was Ravi’s dorm mate at Rutgers University when the two were freshmen, jumped off the George Washington Bridge several days after the bullying incidents in September 2010 in which Ravi set up a remote webcam that spied on Clementi while he was having an intimate encounter with another man.

Ravi was not charged in Clementi’s death and his defense maintained the webcam incidents had nothing to do with Clementi’s decision to commit suicide. He was sentenced — and has already served — his 30-day sentence, three years of probation and 300 hours of community service.

After Ravi’s conviction in 2012, the state Supreme Court in a separate case struck down part of the state’s bias crime statute that focused on the victim’s state of mind. According to that case, it is the defendant’s state of mind and intent that is important, not the victim’s.

The appellate court said the prosecution conceded in its oral arguments four of Ravi’s bias convictions should “be void as a matter of law,” and, accordingly, dismissed those charges with prejudice. The court also dismissed Ravi’s conviction on hindering his own apprehension and tampering with witnesses.