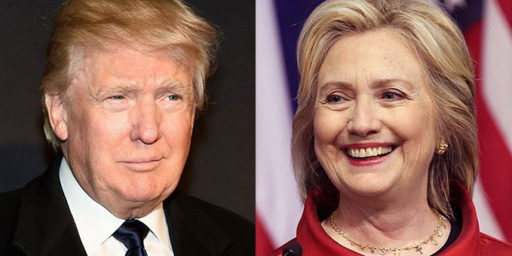 “You know,” Clinton said at the LGBT event, “to just be grossly generalistic, you could put half of Trump’s supporters into what I call the basket of deplorables.”

“Right?” Clinton said as the crowd laughed and applauded.

“The racist, sexist, homophobic, xenophobic, Islamaphobic — you name it,” Clinton continued. “And unfortunately there are people like that. And he has lifted them up. He has given voice to their websites that used to only have 11,000 people — now have 11 million. He tweets and retweets their offensive, hateful, mean-spirited rhetoric.”

The Democratic nominee then sought to draw a distinction between the two halves of the “basket.”

“Now, some of those folks — they are irredeemable, but thankfully they are not America. But the other basket,” she said, “are people who feel that the government has let them down, the economy has let them down, nobody cares about them, nobody worries about what happens to their lives and their futures, and they’re just desperate for change.”

These Trump supporters, Clinton said, “don’t buy everything he says,” but “hold out some hope that their lives will be different” with him as president. “They won’t wake up and see their jobs disappear, lose a kid to heroin, feel like they’re in a dead end. Those are people we have to understand and empathize with as well.”

I guess this means that Hillary just lost the racist vote. Quel dommage.

The Trump campaign is attempting to liken the statement to Mitt Romney’s now infamous “47 percent” comments caught on tape at private fund raising event during the 2012 presidential campaign.

It’s entertaining to see Trump’s campaign, which was launched on the idea that “political correctness” should be ditched in today’s society for more “straight talk,” get all twisted because Hillary called Trump’s followers out for what they are.

I guess they like straight talk until the subject turns to them.

UPDATE: Hillary Clinton has issued a statement expressing “regret” over the “generalistic” nature of her comment last night.

“Last night I was ‘grossly generalistic,’ and that’s never a good idea. I regret saying ‘half’ — that was wrong.”

See the full statement below. 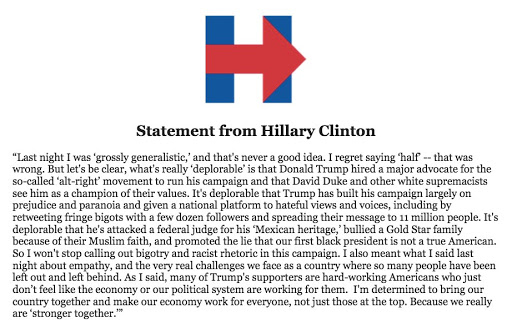