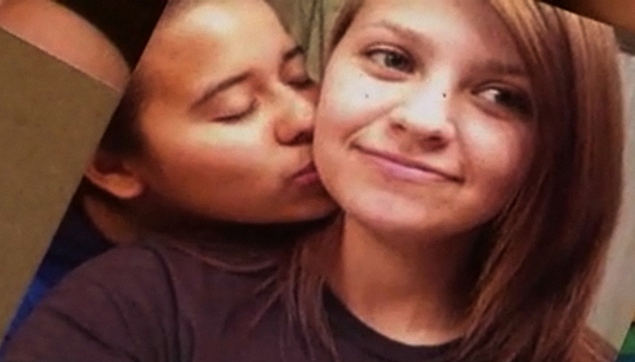 One of them has died. MSNBC reports:

Two
teenage girls in a relationship were found with gunshot wounds to the
head in a south Texas park, with one of them dying from her injuries,
media reports say. Police were searching for their assailants. Mollie
Judith Olgin, 19, and Mary Christine Chapa, 18, were found in knee-deep
grass in a nature area in Portland by a couple Saturday, said Portland
Police Chief Randy Wright, who confirmed to msnbc.com details first
reported by the Corpus Christi Caller Times. Olgin, originally
from Ingleside but recently living in Corpus Christi, died; Chapa, of
Sinton, was rushed to a hospital where she had surgery and was in
serious but stable condition on Sunday, local NBC affiliate kristv.com
reported. Wright said Chapa was still in the hospital on Monday.

Friends say the girls began their relationship five months ago. Police are investigating the shooting as a possible hate crime.