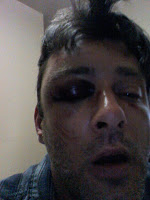 In Soho, a couple was assaulted in the early morning hours, according to NBC News:

A gay couple was attacked early Tuesday in SoHo, hours after thousands marched to protest the killing of a gay man and several other bias attacks that have shaken the community, NBC 4 New York has learned.

Law enforcement sources said the two men, 41 and 42, were walking on Broadway between Prince and Houston streets at about 5 a.m. when two men started yelling anti-gay remarks in English and Spanish. The victims are Hispanic. The men were both punched, and one suffered an eye injury, sources said.

Fabian Ortiz and Pedro Jiminez were arrested and are being charged with third degree assault as a hate crime, police said.

“Allegedly, witnesses are reporting the assailant was yelling “faggot” as he was kicking and beating Dan. Neighbors rushed to Dan’s aid and chased after the attacker but unfortunately he got away. The police are investigating the assault now and have not determine it a hate crime.”