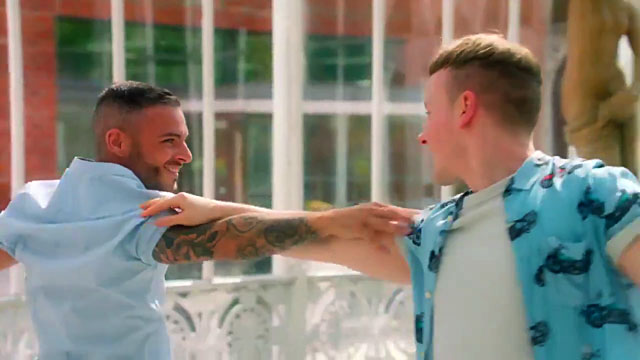 Based on a British series, Flirty Dancing has its participants learn half of a dance routine, then meet their partners for the first time on a blind date “at a breathtaking location,” where they perform the routine without saying a word to one another. The dances are designed, per Fox, to “tell a story reflective of their personal journeys to find love, while also providing clues to the other’s personality.”

The Fox show will differ a bit from the U.K. format by having one person dance with two partners before choosing one to ask on a second date.

And there are same-sex couples! Squeee!!!

Folks on Twitter were all gaga over this cute couple – Garry and Ryan- who turned it out on the November 15 episode in the UK (Season 2, Episode 2): “Garry finds it hard to talk to men he fancies while Ryan has never had a boyfriend.”

Check out the obvious romantic tension between the two as they end the routine.

I have been introduced to #FlirtyDancing—a blind date show where two people learn a dance separately and then must perform it upon meeting each other—and now I’m RUINED. pic.twitter.com/UnLDX7IpRK

According to reports, Ryan and Garry have already been on a second date! Whoohoo!

And from Season One in the UK, this is Luke and Dan exploring romantic, terpsichorean tension:

Check out the promo for the U.S. edition which premieres in December on FOX: