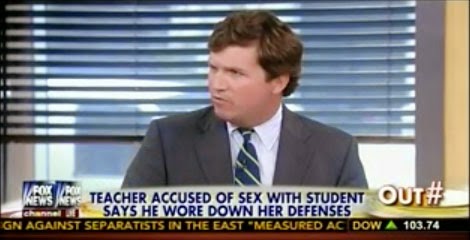 Tucker Carlson – who recently said sex between male students with female teachers would be, in the student’s mind, “the greatest thing that ever happened” – was at it again today with dolling out the double standards.

In a discussion in FOX News’ “Outnumbered” about Queens high school gym teacher Joy Morsi, who is accused of rape by a 16 year old student, Tucker Carlson says it’s “ludicrous” to say the boy was raped.

“It’s ludicrous that we are calling this a rape. Are you serious?” Carson explained.” I’m not joking a tiny bit. I’ll tell you what’s wrong to this extent: he went and tattled to the police and destroyed her life. Are you joking? What a whiny country this is.”

“You’re this boy, and all of a sudden you’re a rape victim? You pursue an older woman, and have a relationship with her, and you’re a rape victim?” he said. “It defies common sense. And anybody who’s being honest with himself knows exactly what I’m talking about. We all have to pretend.”

Carlson concluded by calling the issue a “first world problem,” adding, “this is your problem?”

I’m guessing that what Carlson is calling “pretending” is that all boys think it would be “hot” to have sex with a female teacher?

The ladies on the panel disagreed with Carlson across the board.

Carlson specifically says that if the sexes were reversed in the case it would be completely wrong.

What do you think? If you were a parent and found out your teenage son’s 39 year old teacher was having sex with him, would that be cool?

On the video below, Carlson frames the relationship between teacher and student as one where the student pursued the teacher, but I haven’t found any news reports that substantiate that claim.