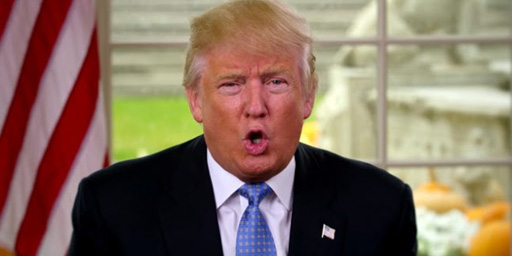 Donald Trump has spent the weekend on Twitter (for a change) attacking the lawmakers in his own party for not passing health care reform.

A few days ago, he advocated “letting Obamacare implode.”

But now, he’s back to berating the GOP-controlled Congress saying they should “demand” another vote.

I’m guessing Trump doesn’t understand that Senate Majority Leader Mitch McConnell doesn’t have to “demand” anything. He can call a vote anytime he wants. Like he did this week. When his bill failed to pass.

Among his current threats, Trump is promising to end “BAILOUTS for insurance companies and BAILOUTS  for Members of Congress.”

After seven years of “talking” Repeal & Replace, the people of our great country are still being forced to live with imploding ObamaCare!

If a new HealthCare Bill is not approved quickly, BAILOUTS for Insurance Companies and BAILOUTS for Members of Congress will end very soon!

Unless the Republican Senators are total quitters, Repeal & Replace is not dead! Demand another vote before voting on any other bill!

Remember when Trump was “the only one who can fix” these issues?

He also attacked China for not solving the world’s problems with North Korean aggression.

Trump is just yelling at people. When is he going to “lead?”

I am very disappointed in China. Our foolish past leaders have allowed them to make hundreds of billions of dollars a year in trade, yet…

…they do NOTHING for us with North Korea, just talk. We will no longer allow this to continue. China could easily solve this problem!