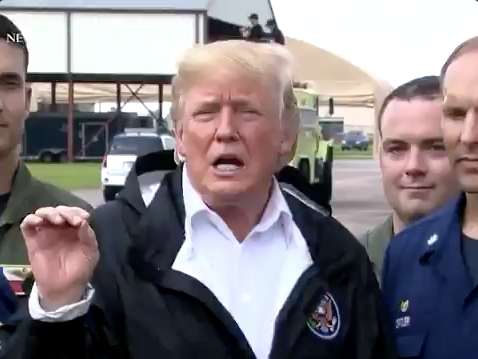 After dropping into the Houston area for the day, Donald Trump took a cheap shot at the media who have been facing horrible conditions for over a week covering the impact of Hurricane Harvey.

Among the many things I despise about the man, crap like this – taking the low road for no reason – make me embarrassed he’s the leader of this country.

Trump visits w/Harvey survivors, throws in dig at the media (media’s been there for days, not parachuting in today) pic.twitter.com/oqdDaCOLEI

Later, he told reporters that “As tough as this was, it’s been a wonderful thing, I think, even for the country to watch.”

No, Donald, it’s been heartbreaking, awful and sad to watch people lose everything. Watch below.

.@POTUS at Houston relief center: “As tough as this was,” the response “has been a wonderful thing, I think, even for the country to watch.” pic.twitter.com/ezvyCWujcQ