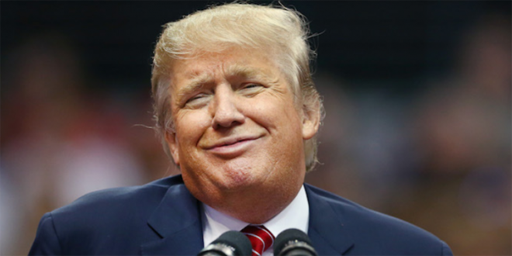 Donald Trump announced today he has pardoned a conservative pundit (and ally) and is now considering a pardon for lifestyle expert Martha Stewart.

Additionally, Trump is reported to be looking at commuting a former Illinois governor’s prison sentence.

Trump announced his decision to pardon pundit and filmmaker Dinesh D’Souza, who pleaded guilty in 2014 to U.S. campaign finance law violations and was an outspoken critic of Democratic former President Barack Obama, on Twitter, saying he had been “treated very unfairly by our government!”

The Republican president then told reporters on a flight to Houston he was also considering a pardon for Stewart, who was convicted in 2004 on charges of conspiracy, obstruction of justice and making false statements in an insider-trading probe.

James Comey, who Trump fired as FBI director last year and has repeatedly attacked, was the lead federal prosecutor in Stewart’s case and played a role in the prosecution of Lewis “Scooter” Libby, the chief of staff to former Vice President Dick Cheney. Trump pardoned Libby in April.

Trump also said he might commute the 14-year prison sentence of former Illinois Governor Rod Blagojevich, a Democrat convicted of corruption charges, and was considering pardoning a woman convicted of a drug-related charge after reality TV star Kim Kardashian discussed the case with him on Wednesday.

D’Souza was found guilty of breaking campaign finance laws in 2012 by using straw donors to raise $20,000 — far more than the legal limit — for his friend Wendy Long, who was running for U.S. senator.

D’Souza says he was targeted by the FBI for prosecution because of his documentary, 2016: Obama’s America, which took a negative view of President Barack Obama.

He was not “treated very unfairly” in that he actually broke the law he plead guilty to. Trump likes D’Souza because he criticized Obama.

D’Souza took to Twitter to mock former U.S. Attorney Preet Bharara (“He got fired & I got pardoned”) whose office prosecuted D’Souza’s case and was fired by President Trump last year.

The President has the right to pardon but the facts are these: D’Souza intentionally broke the law, voluntarily pled guilty, apologized for his conduct & the judge found no unfairness. The career prosecutors and agents did their job. Period. https://t.co/bA3I8vs4QQ via @politico

KARMA IS A BITCH DEPT: @PreetBharara wanted to destroy a fellow Indian American to advance his career. Then he got fired & I got pardoned