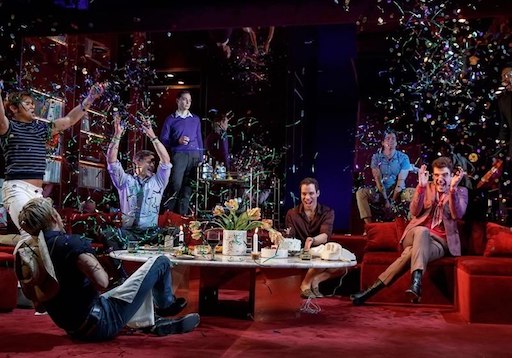 I recently wrote about Matt Bomer’s nearly naked mishap during the previews of the Broadway revival of The Boys In The Band, the iconic homocentric play by Mart Crowley.

To recap, Bomer forgot to check his props before a preview performance and after showering onstage realized he had no towel to cover himself with. But being the pro that he is, Bomer soldiered on through the scene wearing just his wet, tight white briefs.

Tonight, the 50th anniversary production premieres on The Great White Way. And the production has released several promo pics – including one of Bomer in those very tight, white briefs.

The Boys in the Band is rightfully considered a landmark as the first mainstream play to explore gay men’s lives onstage, without filter or judgement. Premiering off-Broadway in 1968 in New York City, this was all before the Stonewall riots which launched the gay rights movement.

The comic drama became an instant sell-out and ran for over 1,000 performances.

The movie adaptation, released in 1970 featuring the original stage cast, continues to be a milestone in queer cinema.

First produced in 1968, Crowley’s biting comedy drama is a groundbreaking work among pre-Stonewall depictions of LGBTQ characters, chronicling the fun and frictions that emerge when a group of gay male friends gather for a boozy birthday party in New York City. The play is loved and loathed to an equal extent, with some calling it a perpetuation of negative bitchy stereotypes and others hailing it as a breakthrough in its intimate exploration of the attitudes and behavior of gay men at a time when cultural representation was minimal.

The limited 15-week run of the production is being produced by Wicked’s David Stone and out TV producer Ryan Murphy (American Horror Story, GLEE)