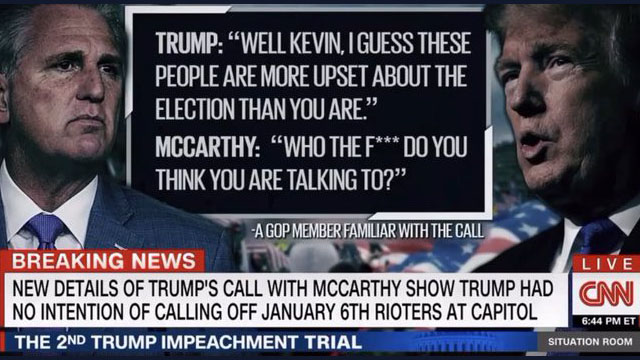 Rep. Jaime Herrera Beutler, a Republican from Washington state, has told CNN that Donald Trump got into a heated conversation with House Republican leader Kevin McCarthy while the U.S. Capitol building was being invaded on January 6.

Herrea Beutler and other House Republicans have confirmed the details of the call wherein McCarthy begged Trump to call off his mob.

“Well, Kevin, I guess these people are more upset about the election than you are,” Trump said, according to lawmakers who were briefed on the call afterward by McCarthy.

McCarthy insisted that the rioters were Trump’s supporters and begged Trump to call them off.

Trump’s comment set off what Republican lawmakers familiar with the call described as a shouting match between the two men.

A furious McCarthy told the President the rioters were breaking into his office through the windows, and asked Trump, “Who the f–k do you think you are talking to?” according to a Republican lawmaker familiar with the call.

Multiple House Republicans say the call demonstrates Trump had no intention of calling off the rioters even as lawmakers were under siege.

Rep. Anthony Gonzalez (R-OH), who voted last month to impeach Trump, said, “I think it speaks to the former President’s mindset. He was not sorry to see his unyieldingly loyal vice president or the Congress under attack by the mob he inspired. In fact, it seems he was happy about it or at the least enjoyed the scenes that were horrifying to most Americans across the country.”

This news broke after the impeachment proceedings had ended for the day. As Dan Rather asks, how do you not call McCarthy as a witness at this point?

With breaking news, I don’t know how you don’t call witnesses. https://t.co/1I010mDqcJ

So we have yet another smoking gun. @jamiegangel reports on phone call between Trump and Kevin McCarthy on January 6. McCarthy begs for help in the siege. Trump refuses. Two points. Shows McCarthy’s cowardice on impeachment. Shows Trump reveled in the violence.

And then McCarthy met with him in Florida

What a beta cuck https://t.co/jKpGkwaYS2