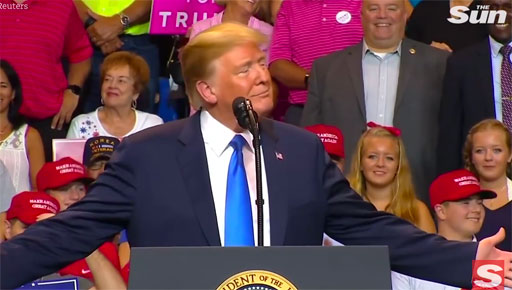 At last night’s rally for Donald Trump in Pennsylvania, the Trumpster claimed that the ‘fake news’ erroneously reported he had been 12 minutes late for his meeting with Queen Elizabeth, despite the fact that news cameras captured the monarch waiting for the president to arrive.

“So I then go up and meet the queen and she is fantastic. We then go up and we have tea. And I didn’t know this it was supposed to last for 15 minutes but it lasted for like an hour because we got along. We got along!

“So here’s the story by the fake news. ‘The president was 15 minutes late for the Queen!’ Wrong.”

Here’s what the world saw: