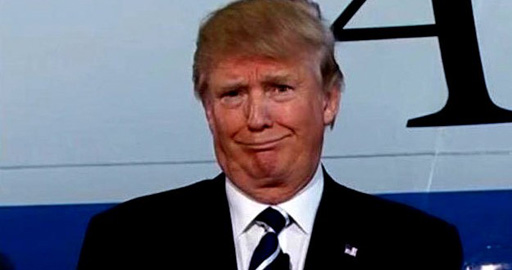 For a year, Donald Trump has repeatedly denied having “nothing to do with Russia.”

Here’s just one sample of his denials:

Russia has never tried to use leverage over me. I HAVE NOTHING TO DO WITH RUSSIA – NO DEALS, NO LOANS, NO NOTHING!

But it turns out the Trumpster actually signed a “letter of intent” to build a “Trump Tower Moscow” four months into his presidential campaign.

The involvement of then-candidate Trump in a proposed Russian development deal contradicts repeated statements Trump made during the campaign, including telling ABC News Chief Anchor George Stephanopoulos that his business had “no relationship to Russia whatsoever.”

The disclosure from Cohen, who has described himself as Trump’s personal lawyer, came as Cohen’s attorney gave congressional investigators scores of documents and emails from the campaign, including several pertaining to the Moscow development idea.

“Certain documents in the production reference a proposal for ‘Trump Tower Moscow,’ which contemplated a private real estate development in Russia,” Cohen’s statement says. “The decision to pursue the proposal initially, and later to abandon it, was unrelated to the Donald J. Trump for President Campaign.”

In a separate statement texted to ABC News, Cohen added that “the Trump Moscow proposal was simply one of many development opportunities that the Trump Organization considered and ultimately rejected.”

Cohen specifically says in his statement that Trump was told three times about the Moscow proposal.

“To the best of my knowledge, Mr. Trump was never in contact with anyone about this proposal other than me on three occasions, including signing a non-binding letter of intent in 2015,” his statement says.

Also found in the emails was a message from Trump associate Felix Sater to Cohen boasting of his ties to Russian President Vladimir Putin.

“I will get Putin on this program and we will get Donald elected,” Sater wrote in an email. “Buddy, our boy can become president of the USA and we can engineer it. I will get all of Putins team to buy in on this, I will manage this process.”

Taking a trip on the way-back machine, we find this tweet from Cohen last December that doesn’t seem to have aged well:

FBI acknowledges no link between @realDonaldTrump and #Russia. Propaganda being put out by @HillaryClinton campaign. https://t.co/OzbnYET1bI— Michael Cohen (@MichaelCohen212) November 1, 2016