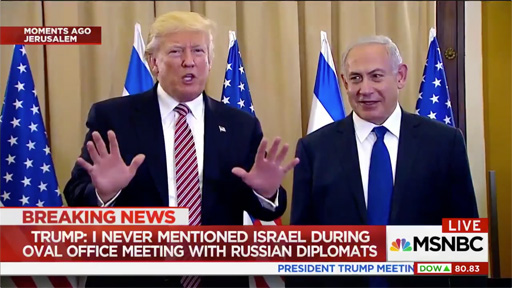 President Trump took a moment today during a meeting with Israeli Prime Minister Benjamin Netanyahu to tell the press that he never mentioned the name “Israel” during an Oval Office meeting with Russian officials earlier this month.

However, as Kyle Griffin of MSNBC correctly states, divulging the source of the shared intel during the Oval Office meeting with Russian officials was never the issue.

By volunteering this information, Trump has now publicly disclosed more classified information for the purpose of attacking the press for something no one said.

Watch Netanyahu wince as Trump makes his statement in the video below.

(That was not the issue—Story never alleged Trump divulged source.) pic.twitter.com/oSi8rQmQe0