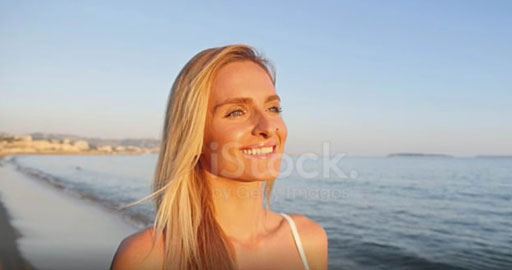 In an effort to boost Donald Trump’s standing with certain demographics (like women, Hispanics and younger voters), the Trump campaign has produced video endorsements now running on Facebook and Google.

One, for example, gives us “Tracey,” a young blond woman, walking down the beach, while a voiceover (which a viewer would assume is Tracey) says, “President Trump is doing a great job. I could not ask for a better president of the United States of American.”

But here’s the thing: “Tracey” is actually a stock video clip anyone can buy at iStockPhoto.com.

Anyone watching the campaign ad would assume “Tracey” is a real Trump supporter.

This is literally “fake news.”

There is a disclaimer on the campaign ad – “Actor portrayal. Actual testimonial” – but the disclaimer only shows for a brief period and is in a tiny font size.

There are additional videos featuring a young, bearded hipster and a Hispanic man.

The Trump campaign wants you to believe these stock footage models are MAGA supporters pic.twitter.com/SM916mGW3b