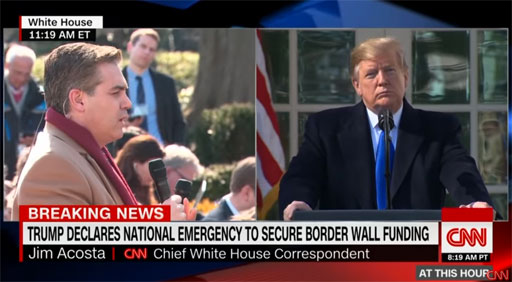 Reporters noted before Donald Trump’s press conference yesterday in the White House Rose Garden that no teleprompters were set up, a sign that Trump might be a bit freewheeling at the event.

Other than a few cards with notes, Trump announced he was declaring a ‘national emergency’ over border security, and then took questions from reporters.

CNN’s Jim Acosta tried to ask about the ‘disconnect’ between Trump’s proclamations of ’emergency’ versus data coming from the federal government that border crossings have been declining for years and presently at near record lows.

“I wonder if you could comment on this disconnect that we seem to have in this country where you are presenting information about what’s happening at the border,” Acosta said, “calling it an invasion, talking about women with duct tape over their mouths and so on, yet there is a lot of reporting out there, a lot of crime data out there, there is a lot of Department of Homeland Security data out there, that shows border crossings at a near record low.”

And Acosta is correct. Check out these stats from Trump’s own Customs and Border Protection:

As we await the declaration of a national emergency on the southern border, this is what illegal border crossings actually look like over the last two decades, via Trump’s own @CBP. pic.twitter.com/hpatp5YSsE

But the Trumpster became very defensive saying he uses “a lot of stats” to come up with his position, and soon segued into a classic episode of Trumpism attacking Acosta.

“The numbers that you gave are wrong,” Trump added. “Take a look at our federal prison population. See how many of them percentage-wise are illegal aliens. Just see. Go ahead and see. It’s a fake question.”

This was something. The video below is cued up to Acosta’s question, but you can watch the full on press event as well.