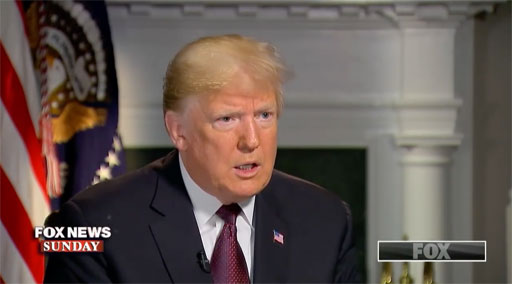 Donald Trump raised eyebrows over the weekend when, during an interview with Fox News‘ Chris Wallace, he not only wouldn’t give credit to the capture and killing of Osama bin Laden during the Obama administration, but he criticized the mission saying it took too long.

“Fox News Sunday” host Chris Wallace noted during a discussion with the president that retired Navy Adm. William McRaven has said Trump’s attacks on the media are the “greatest threat to democracy in his lifetime.”

“You’re not even going to give them credit for taking down bin Laden?” Wallace asked.

Regarding being a “Hillary” fan or “Obama” fan, McRaven told CNN later that evening:

“I did not back Hillary Clinton or anyone else. I am a fan of President Obama and President George W. Bush, both of whom I worked for. I admire all presidents, regardless of their political party, who uphold the dignity of the office and who use that office to bring the nation together in challenging times.”

The McRaven/Bin Laden chat begins around 4:37 mark below:

It’s worth noting that back in 2011, Trump was more than pleased with the results of the Navy Seals and CIA.

“I want to personally congratulate President Obama and the men and women of the Armed Forces for a job well done.”

“I am so proud to see Americans standing shoulder to shoulder, waving the American flag in celebration of this great victory.”

“We should spend the next several days not debating party politics, but in remembrance of those who lost their lives on 9/11 and those currently fighting for our freedom. God Bless America!”

I guess that good will goes away when you become a politician?

Of course we should have captured Osama Bin Laden long before we did. I pointed him out in my book just BEFORE the attack on the World Trade Center. President Clinton famously missed his shot. We paid Pakistan Billions of Dollars & they never told us he was living there. Fools!..

….We no longer pay Pakistan the $Billions because they would take our money and do nothing for us, Bin Laden being a prime example, Afghanistan being another. They were just one of many countries that take from the United States without giving anything in return. That’s ENDING!

McRaven responded to the criticism in a statement doubling down on his assertion that Trump’s attacks on the media are “the greatest threat to our democracy” in his lifetime.

Adm. McRaven responds: “I admire all presidents, regardless of their political party, who uphold the dignity of the office … I stand by my comment that the President’s attack on the media is the greatest threat to our democracy in my lifetime.” https://t.co/VRvAEaA0l1

And it appears Trump has a short memory, because one reporter says McRaven was on the Trumpster’s short list for national security adviser.

Navy Seal Robert J. O’Neill, who actually shot bin Laden, chimed in saying the mission was ‘bipartisan’ and “We all wanted to get him as soon as we could.”

The mission to get bin Laden was bipartisan. We all wanted to get him as soon as we could.

And when a MAGA troll questioned whether bin Laden was killed as soon as possible, O’Neill responded, “We could only fly so fast, bro.”

We could only fly so fast, bro. https://t.co/yAFgsQZUsb

To veterans who supported @realDonaldTrump,