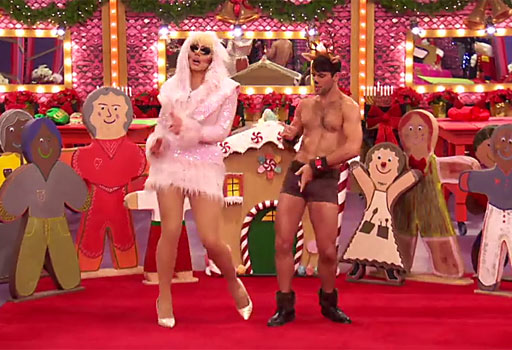 We’ve got just the thing to spice up your Monday as VH1 drops this video teaser for the upcoming RuPaul’s Drag Race Holi-Slay Spectacular.

The quick video reveals members of the Pit Crew dressed as reindeer offering some prancing of their own with Kim Chi and Trixie Mattel; Ross Matthews as an adorable ‘Elf on a shelf;’ and Eureka surprised opening a big package.

“It’s Christmas so we’re laughing and having fun…. Trixie is excited to open presents and can’t be bothered, and Shangela is posting Christmas Cards on the wall,” Mama Ru recently told EW. “Everyone wants to have fun, knowing it’s just one episode for a holiday, but the competition is real.”

Tune in to see the queens lip-sync to music from RuPaul’s two holiday albums, Slay Belles and Christmas Party, as well as choreography by Todrick Hall.

’Tis the season for slaying, so hit the play button below.