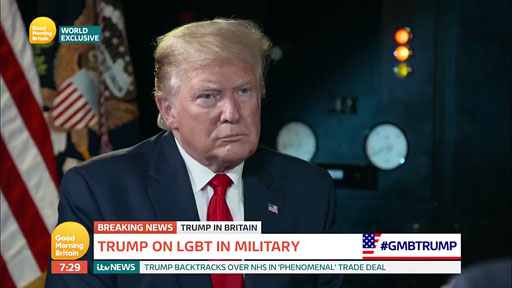 Donald Trump, currently on a three-day state visit to the UK, defended his ban on transgender soldiers in the U.S. military by lying about the ‘massive’ cost of hormone treatment.

Trump sat down with his old pal and former winner of Celebrity Apprentice, Piers Morgan, on iTV’s Good Morning Britainto chat for an hour on a range of subjects.

While mentioning the president’s recent tweet acknowledging Pride Month, Morgan wondered how the same Donald Trump could also support the new military policy that went into effect April 12 that bans anyone who is openly transgender or has transitioned from joining the military.

Only service members who were already enlisted, and diagnosed with gender dysphoria prior to the new policy, may serve in the military openly as their gender identity.

“They take massive amounts of drugs, they have to, and you’re not allowed to take drugs, you’re in the military, you take an aspirin,” defended Trump. “And they have to after the operation, they have to, they have no choice.”

The president, who famously avoided serving in the military himself, went on to claim that taking hormone treatment would “break rules and regulations.”

‘You have to have a standard and you have to stick by that standard.’

The POTUS defends his decision to ban transgender people from serving in the military.@piersmorgan | #GMBTrump pic.twitter.com/heBUjhwiUH

He also complained about “massive amounts of people” enlisting and then transitioning during their service in order to get free surgical procedures.

However, Trump’s statement about the costs for transgender medical care is patently false.

According to MilitaryTimes, the Pentagon spent $8 million on transgender health care since 2016. That figure represents a tiny fraction of the military’s $50 billion health care budget.

And while Trump finds $8 million for trans soldiers’ healthcare to be untenable, he doesn’t seem to mind the $84.2 million the defense department spent in one year on erectile dysfunction medications.

When Morgan mentioned this fact, the Trumpster claimed he didn’t know that.

“It is what it is,” Trump replied.

Morgan tried to point out that many trans military members have been honored with medals for valor and achievement, but Trump didn’t care.

“I’m proud of them, I think that’s great,” said Trump, brushing the comment aside. “But you have to have a standard, and you have to stick by that standard, and we have a great military and I want to keep it that way.”