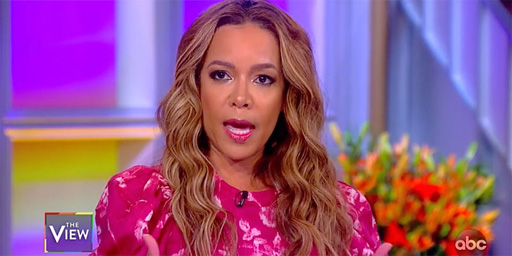 During Monday’s episode of The View, the gabfest was discussing the beginning of Pride Month when a recent tweet by Catholic Bishop Thomas Tobin of Providence, Rhode Island, came up.

Bishop Tobin had taken it upon himself to remind Catholics not to attend Pride events this month because “they promote a culture and encourage activities that are contrary to Catholic faith and morals.”

Tobin added that Pride events “are especially harmful for children.”

A reminder that Catholics should not support or attend LGBTQ “Pride Month” events held in June. They promote a culture and encourage activities that are contrary to Catholic faith and morals. They are especially harmful for children.

The irony here is that this is the same bishop who acknowledged in 2018 that he “became aware of incidents of sexual abuse” in his diocese in the mid-1990s, but said reporting the allegations were not part of his “responsibilities,” and so, he remained silent. 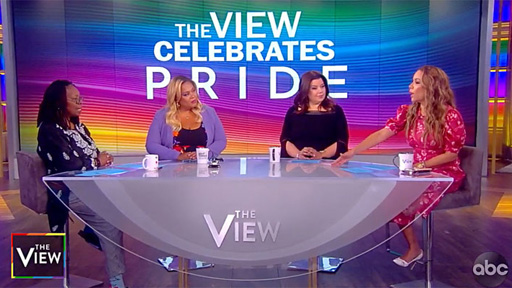 Back to The View, one of the show’s co-hosts, Sunny Hostin, shared that she is a practicing Catholic and she wouldbe attending a Pride event with her children because that’s “what Jesus would do.”

“I tweeted out that my Catholic children will be attending Pride events as this Catholic will,” she shared with her co-hosts. “And you know, my faith always taught me, ‘What would Jesus do?’ And I know Jesus would be attending that Pride parade, with pride.”

This practicing Catholic will be supporting and attending LGBTQ Pride events. And so will my Catholic children. You should be ashamed @ThomasJTobin1 🏳️‍🌈 https://t.co/tqsyp137Fg https://t.co/RgGeoufXxR

“And I also know that God is love, Jesus is love, love is love,” she added. “For a Catholic bishop to come out and say something like that given the history of pedophilia in the Catholic church, given what the Catholic church has hidden about the abuse of children, some would say that being at a Pride parade would be much safer for a child than it has been to be in a Catholic church for many years.”

Now, we love Ms. Hostin for the awesome support – and the epic breakdown of obvious hypocrisy by the church – but, the story doesn’t end there.

Homophobic inhabitants of the Twitterverse started losing their minds attacking Hostin, and it got ugly quick.

There is a special place in hell for this person. 🔥🔥🔥 Sunny Hostin On ‘The View’: Jesus Would Be Attending A Gay Pride Parade | Daily Wire https://t.co/SIebWVMqM7

@TheView Sunny Hostin’s mind is poisoned by the virus of liberalism that is anti-family, anti-decency, anti-principles, anti-everything that is normal. To suggest that kids are safer in a LGBT event than in a church is the final insult from this low-class show. Go to hell all!

@kramerreport @Charliekirk11 @sunny @TheView “Sunny Hostin On ‘The View’: Jesus Would Be Attending A Gay Pride Parade”. The real question is would gays be attending if Jesus did? Would they expose themselves or be ashamed? Jesus hasn’t forgotten gays, THEY have forgotten Him.

Blasphemy! Sunny Hostin has an ever lower IQ than AOC. In-fact, she makes Shelia Jackson and Maxine Waters look like they deserve the Nobel for Dumb Chitz. I don’t think that dolt even has AIR left in her head. She puts the Jack, in JackA**.https://t.co/1jWt8BmXFv

@Sunny Hostin: WRONG! You obviously do not know a DAMNED THING about what the Bible says, especially what is stated in Genesis Chapter 19 and Romans Chapter 1 … You can take your foot out of your a** now. https://t.co/f1Nuf4Cw8i

Sunny Hostin from “The View” says Jesus would attend a gay pride parade.

And I think she’s right.

But he wouldn’t be there out of support, he would be there to preach repentance to the sinners.

WTF does Sunny Hostin know what Jesus would do? She is another dumbazz with a law degree who is just paid to follow DNC commands like a trained poodle.