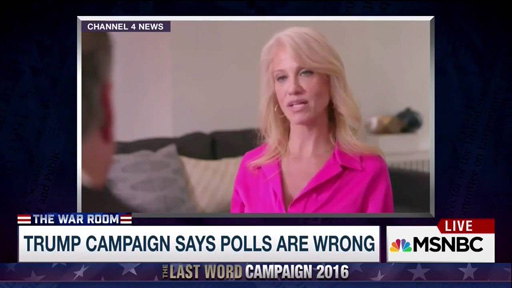 Trump campaign manager Kellyanne Conway told the UK’s Channel 4 that Donald Trump is actually winning the election, but every poll is wrong because Trump voters are undercover.

Conway denied on the Channel 4 special “President Trump: Can He Really Win?” that Trump was losing and denounced the polls that showed him down to Hillary Clinton as “cherry-picked polling numbers that are put out there by media outlets that are also bent on his destruction.”

“Donald Trump performs consistently better in online polling where a human being is not talking to another human being about what he or she may do in the election,” she argued. “It’s because it’s become socially desirable, if you’re a college educated person in the United States of America, to say that you’re against Donald Trump.”

“The hidden Trump vote in this country is a very significant proposition,” she insisted.

“Have you been able to put a number on that?” asked the Channel 4 interviewer.

“What do you think that is?”

“I can’t discuss it,” she said. “It’s a project we’re doing internally. I call it the undercover Trump voter, but it’s real.”

Very interesting spin. I find it very hard to believe that, given the “out and proud” Trump crazies, that there are enough “undercover Trump voters” to really skew every major poll in the country for a month.