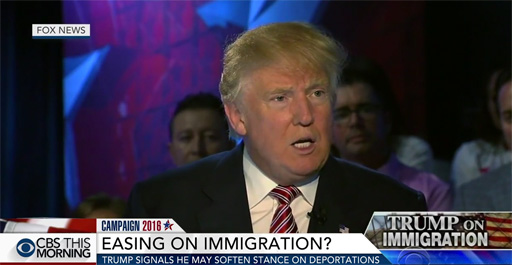 I can’t see how “softening” his approach to immigration will make his core supporters happy.

Donald Trump indicated he could be on his way to one of the most surprising policy shifts of his presidential campaign: that he might be open to letting at least some undocumented immigrants in the United States remain. This came after days of confusion about his stance on large-scale deportations and after an immigration speech planned for Thursday in Colorado was scrapped.

His answer was in response to a question from Hannity about whether Trump would be willing to change laws to accommodate undocumented immigrants who had committed no crimes, apart from their immigration violation.

It could be a significant shift in both policy and tone for the GOP nominee, given that Trump has spent almost the entirety of his candidacy supporting a mass deportation policy that would allow those that hadn’t committed crimes to return legally after deportation. He has also routinely linked illegal immigrants to crime.

For months, Trump even touted the President Dwight D. Eisenhower-era “Operation Wetback,” a controversial operation in which the United States government rounded up and forcibly deported hundreds of thousands of undocumented Mexican immigrants, some of whom died in the process.

Political reporters have noted that Trump and his surrogates on the campaign trail have avoided the word “deportation” like the plague these past two weeks.

It’s interesting that Trump has mentioned that both Presidents Obama and Bush deported large numbers of undocumented immigrants during their administrations, and takes time to say we have “very, very strong laws.”

When you add that all up, you have to wonder what it is that Trump’s opposing then. He seems to be saying Obama and Bush did their jobs. And THAT makes for an odd pivot in my mind.