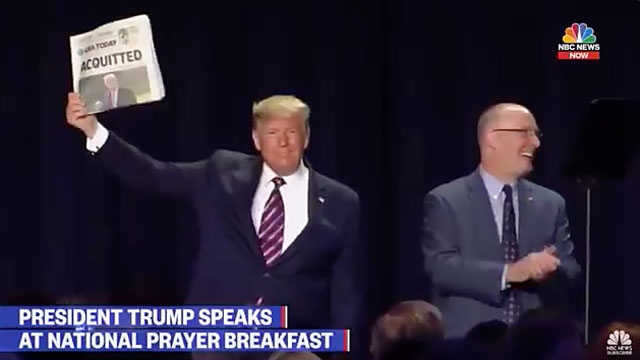 Donald Trump used this morning’s bipartisan National Prayer Breakfast to attack “dishonest and corrupt” individuals who opposed him in his impeachment trial singling out Sen. Mitt Romney (R-UT) who voted against Trump, and Speaker of the House Nancy Pelosi.

Entering the stage, Trump lifted up a copies of USA Today and The Washington Post with headlines reading “ACQUITTED” and “Trump Acquitted” splashed across the front pages, displaying them to the crowd.

“I don’t like people who use their faith as justification for doing what they know is wrong. Nor do I like people who say, ‘I pray for you,’ when they know that that’s not so. So many people have been hurt and we can’t let that go on. And I’ll be discussing that a little bit later at the White House.”

At prayer breakfast, Trump unloads: "As everybody knows, my family, our great country and your president have been put through a terrible ordeal by some very dishonest and corrupt people they have done everything possible to destroy us and by so doing very badly hurt our nation."

Pres Trump only shook hands with those on his side of the Dais. @SpeakerPelosi was seated on the other side of the Dais – and @POTUS didn't walk down to greet those dignitaries. He sat quietly as Pelosi delivered a prayer for the poor and persecuted. pic.twitter.com/h2am3CYQGV