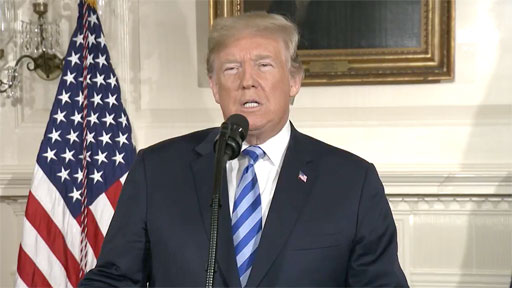 Donald Trump announced today that the United States will be leaving the Joint Comprehensive Plan of Action (JCPOA).

The 2015 agreement between the United States, Iran, Germany, France, the United Kingdom, China, Russia and the European Union eased sanctions on Tehran in exchange for curbing its nuclear program.

In withdrawing from the nuclear deal, Trump says the U.S. will reinstate “the highest level” of sanctions against Iran.

Responding to the news, Iranian President Hassan Rouhani told his country, “I have ordered Iran’s Atomic Energy Organization to be ready to restart industrial nuclear activities in case we feel it is needed.”

In a rare public expression of disagreement, former President Obama issued a statement which read, in part, “The consistent flouting of agreements that our country is a party to risks eroding America’s credibility, and puts us at odds with the world’s major powers.”

Obama statement: “I believe that the decision to put the JCPOA at risk without any Iranian violation of the deal is a serious mistake. Without the JCPOA the United States could eventually be left with a losing choice between a nuclear-armed Iran or another war in the Middle East”

The President’s “accomplishment” today is making it easier for Iran to re-start its nuclear weapons program.

For this, he’ll get a big cheer from the same crowd who got us into Iraq.

Vote them out. Vote them all out.

European leaders are expressing regret with @realDonaldTrump decision to withdraw from the Iran deal. pic.twitter.com/FtmIbuJDDg

By pulling out of the Paris Accord and now the Iran Deal, Trump has destroyed America’s credibility to make international agreements that last beyond the term of the President in power at the time#JCPOA