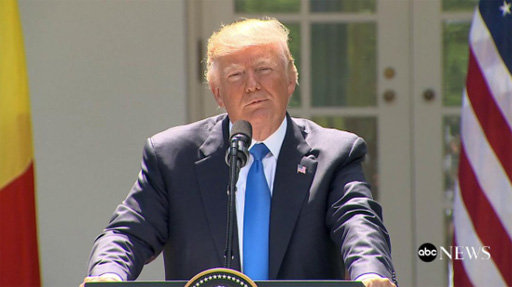 Answering Karl’s question today at a press event with Romania’s President, Trump asserted that Comey lied in some parts of the testimony he gave Thursday to the Senate intelligence committee.

Trump says that he never asked Comey for a pledge of loyalty, and never told Comey he hoped the investigation of former national security adviser Michael Flynn would go away.

When asked if there are recordings of his conversations with Comey, President Trump says he will let the American people know very shortly but, “You’re gonna be very disappointed when you hear the answer.”

It goes without saying that Trump’s rather “shaky” relationship with the truth makes it easy to believe he would happily lie under oath.

Grab your popcorn and tuned.

Pres. Trump would “100%” be willing to say under oath that he didn’t ask Comey to let Flynn investigation “go”; didn’t say “I need loyalty.” pic.twitter.com/TayObtkChX