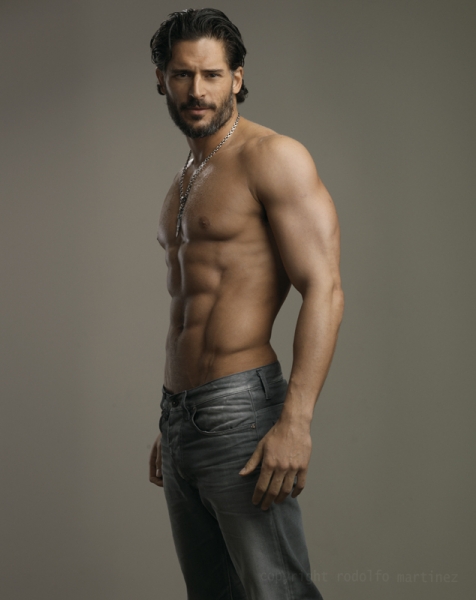 Not that I really NEED a reason to post a picture of him, but Joe Manganiello (of TRUE BLOOD on HBO) gave an interview to eonline.com about staying in shape, keeping his clothes on or off and his joking about “manscaping” at the NewNowNext Awards.

Regarding his muscular build: “Sometimes I think, ‘Man, maybe I raised the bar a little too high last year,’ ” the actor tells me, adding with a laugh, “I’m also at the age where this is the time to do it. So if I’m going to do it, let’s see how far we can push it.”

About how often he has to be naked on TRUE BLOOD: “It’s definitely a lot. I was talking recently with my manager Coleen, and we calculated that in the first seven episodes that I’ve filmed for the new season, I was naked three out of the seven. So yeah, there’s a lot.”

Manganiello would like to clear up one thing — he does not use a professional groomer for his body hair. He actually started the rumor when he thanked his “manscaper” after winning the Cause You’re Hot award last month at the NewNowNext Awards.

“It was a complete joke!” he said. “I was training with my trainer, and he’s like, ‘Dude, do you know about this manscaping thing? And then he explained the whole thing. I was like, ‘I’m going to talk about that at the awards.’ So I made it up. I actually don’t need one. I’m Sicilian and Armenian, so you would think I would, but I’m completely hairless. I don’t know how I won that roll of the dice.”