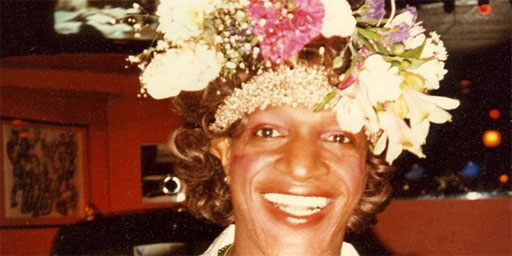 Noting that obituaries in the Times have long been dominated by white men, the new series Overlooked includes a lengthy paean to Johnson honoring her groundbreaking activism on behalf of the LGBT community.

Marsha P. Johnson was an activist, a prostitute, a drag performer and, for nearly three decades, a fixture of street life in Greenwich Village. She was a central figure in a gay liberation movement energized by the 1969 police raid on the Stonewall Inn. She was a model for Andy Warhol. She battled severe mental illness. She was usually destitute and, for much of her life, effectively homeless.

When she died at 46, under murky circumstances, in summer 1992, Johnson was mourned by her many friends, but her death did not attract much notice in the mainstream press.

In the years since, however, interest in her legacy has soared. She has been praised for her insistent calls for social and economic justice; for working on behalf of homeless street youth ostracized by their families for being gay or otherwise not conforming to traditional ideas about gender; and, later, for her advocacy on behalf of AIDS patients. Some have called her a saint.

Although the term transgender wasn’t in wide use during her lifetime, Johnson identified by a rotating list of labels from gay, transvestite or simply “queen.”

In a 1992 interview, Johnson declared, “I was no one, nobody, from Nowheresville, until I became a drag queen.”

In a life long riddled with strife and conflict, Johnson was known to live her joyful exuberance even as she worked for LGBT acceptance.

“As long as gay people don’t have their rights all across America,” she once said, “there’s no reason for celebration.”

Read the full, well-deserved profile at The New York Times.