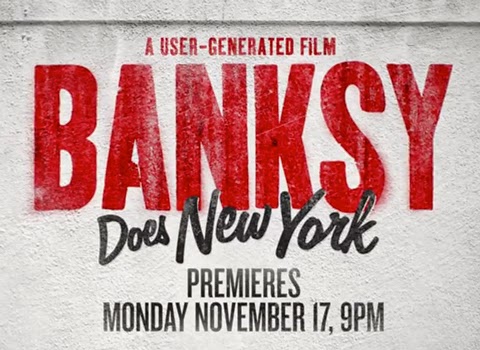 Back in 2013, infamous UK street artist Banksy set up a one month residency in NYC creating whimsical art installations throughout the city’s five boroughs. I wrote about one of the artists episodes at the time here.

A sneak peek at the documentary Banksy Does New York before its on-air premiere, beginning Oct. 31 on HBO On Demand and HBO GO.

The film will debut on HBO on November 17th.

Over the course of a month-long residency in New York, Banksy and his team took to the streets – secretly creating a variety of public work ranging from elaborate conceptual stunts to traditional graffiti art.

Constructed under the dark of night, each new piece was then announced daily on his #BANKSYNY Instagram account and chronicled on his pop-up website creating a community wide scavenger hunt.

Constantly evading a citywide search by the NYPD, Banksy’s work created a public response that was an equal mix of reverence and derision, with some of the more controversial statements sending waves of reaction throughout the city.

From a Central Park stand where priceless original works were anonymously sold for $60 to a mural on the entrance to the Hustler strip club, to a junkyard in Willets Point, Queens; New York City served as the canvas for this street art vigilante.

The film, directed by NY-er Chris Moukarbel, constructed the doc from all publicly content. “I crowd-sourced footage that New Yorkers posted online each day of the month. It was about a city holding a mirror back up to the artist.”