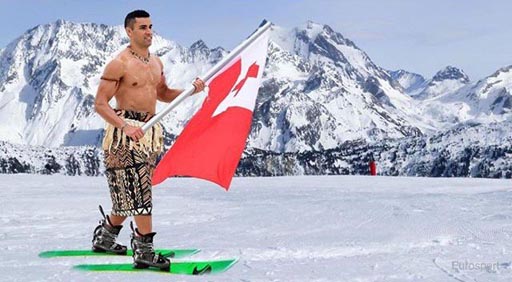 Now, many of you will remember how the world stopped when hunky, handsome, coconut-oiled Pita Taufatofua of Tonga made his entrance at the opening ceremony of the 2016 Summer Olympics carrying his country’s flag.

After two previous attempts to qualify, Pita made it to the Summer Olympics to compete in Taekwondo. Unfortunately, he was eliminated early in Rio.

But his good looks and upbeat personality definitely made an impression on the world. He was featured on NBC’s The Today Show and in the games’ closing ceremonies.

Four months later, he announced to his burgeoning social media that he wasn’t waiting four years for the next Summer Olympics. He decided to pick a winter sport and qualify for the Winter Olympics Games in Pyeongchang.

Now, living in Brisbane, Australia, with no snow nearby presented an obvious challenge.

That and the fact that he’d never picked up a pair of skis.

But Pita was a man on a mission.

Over the course of a year, Pita would need to drop 30 pounds from his muscular Taekwondo physique and learn to ski in tropical weather.

Instead of driving long hours to the nearest mountain in the winter, he worked out on the beach with roller-skis.

According to the Wall Street Journal which has chronicled this story in detail, there’s an Olympic rules loophole that didn’t require him to ski on snow. After the Sochi games, the International Ski Federation changed its rules to allow points from roller-skiing events to count towards cross-country skiing.

To just qualify for the 2018 Olympic games, Pita needed five finishes that satisfied a formula designed to keep newbies like him out of the Olympics. In a truly herculean effort, Pita achieved four qualifying finishes during a week of roller-skiing in Colombia this winter.

But Pita found himself one finish short. And there were no more roller-skiing events left.

Pita raised funds via GoFundMe (Tongan culture frowns heavily on asking for support) and headed to Austria to train with a real coach in the snow.

With only six weeks to the 2018 Winter Games, there was a lot to be learned: basics like letting a faster skier pass you and knowing the different kinds of wax for your skis depending on conditions like dry snow, wet snow, hard snow, soft snow. Pita only had a stick of snowboard wax purchased on eBay.

In late December, Pita used the last of his money to compete in the final races of the season in Europe. But being new to the pace, altitude, and conditions of actual cross-country skiing he fell short.

Choosing a race in Armenia over Croatia didn’t give him the results he so badly needed. Pita only had “hard track” skis and the night before the event a blanket of powder snow fell on the track.

In a harrowing journey he shared on his Instagram, he decided to make a mad dash to that final Croatian race. With no flights nearby, Pita traveled six hours via taxi.

After racing across 5 countries over 24 hours to Istanbul Airport, he arrived at the gate 15 minutes before his flight was scheduled to depart.

But – Turkish Airlines had closed the gate and would not allow him on the plane. Truly heartbreaking.

He posted a photo of his airline ticket in hand from the airport gate with the plane in the background.

In truth, I read Pita’s post six days ago and marveled at his world-class determination. This IS Olympic spirit. Sitting at my desk, I sat back and applauded all this incredible effort.

This morning my blogger buddy Larry at The OUTFront sent me a link to the next ‘straight-out-of-the-movies’ chapter that had escaped me. Total props to Larry for following through.

A few days after missing his flight, Pita heard “whispers” of one more qualifying race near the Arctic Circle in northern Iceland. Over two days, he and his friends tried to reach the event even under the downpour of a massive snowstorm.

Reaching the event, the storm continued. But Pita used the time to keep conditioning himself indoors.

I know you’re waiting for me to type the words, so here you go via Pita:

“On the last day of my Olympic qualification, at the end of the world, I said a little prayer before my race and then a miracle happened! TONGA IS GOING TO THE WINTER OLYMPICS! 🇹🇴 Mathew 17:20 -Faith”

Technically, the only thing left is for Tonga to name him to the Olympic team but considering there are no other Tongan skiers, I think he has this.

He will be the first Tongan skier in Winter Olympics history. Tonga’s only previous Winter Olympian was Fuahea Semi who finished 32nd out of 39 in the men’s luge event four years ago at the Sochi Games.

However, other countries have Olympic Federations and support groups but not Tonga. Pita will have to fund his own way to South Korea.

If you are so inclined, I urge you to donate anything you might feel appropriate to his GoFundMe here.

If anyone has ever demonstrated Olympic “can-do” spirit, it’s this guy.

This is me and an Armenian taxi driver speeding on a 6 hr drive from Armenia through the border to Georgia to catch a flight. I’m not sure what the red light is for but I hope it makes the car go faster. My race in Armenia didn’t work out. The night before the race we had a downpour of fresh soft snow which doesn’t work so well for my one pair of Hard track skis, that mixed with my weight and I struggled through the course. 21 hills and I felt every one. But there are no excuses, I fell short of the mark. I chose the Armenia race over the Croatia race and paid the price. As soon as I finished the race I decided no matter what we would try and find a way to get to Croatia by tomorrow morning. None of the flights connected so we searched all surrounding countries on both sides and here I am next to my friend who doesn’t speak a word of English, probably a good thing as I need the rest. My amigo from Chile Yona helped by lending me a pair of his skis in case the conditions are soft snow again and we waxed them on the hotel dining table. My other amigo German from Mexico helped find a private taxi to try and get to the race on time. There is a very slim chance we will get to Croatia in time for this race and with no sleep. Wherever there’s a chance we will take it. We don’t give up. #armenia #georgia #turkey #croatia all in 12 hrs #noSleep #olympian #life
A post shared by Pita Taufatofua (Pita T) (@pita_tofua) on Jan 12, 2018 at 4:06pm PST

I raced through 5 countries in the last 24hrs to try and get to my race in Croatia. I sat in a taxi for 6 hrs driving through Armenia into Georgia in the middle of the night. I sat on the front seat of the @turkishairlines plane, sprinted through the airport and snuck through the business class fast transit lane and somehow managed to arrive at the gate 15 min before departure for my flight to Croatia. Once there I found that @turkishairlines had shut the gate early even after their delayed initial flight from Georgia, leaving me stranded. After remembering a scene from a James Bond movie, I pressed all the buttons on the aerobridge door to see if I could somehow open it and sprint down to the connecting flight, unfortunately that didn’t work, and luckily I didn’t get arrested. So here I am sitting at Istanbul airport missing the race that could have possibly gotten me to the Olympics. It was always going to be a long shot but I had to give it a shot and I did. Soo many times in life we will get disappointed. When this happens I have two options. I can sit on that chair crying about what could have been and how unfair life is…. or I can go and find some good quality chocolate, pull out my notepad and start planning “what’s next”— I always did like chocolate…
A post shared by Pita Taufatofua (Pita T) (@pita_tofua) on Jan 14, 2018 at 5:10pm PST

Two days ago I heard whispers of an all or nothing race up near the arctic circle in the remote North western fjords of Iceland. It is on the last day of the Olympic qualification period. For two days we have tried unsuccessfully to drive there. Twice we have been sent back by impassable roads due to a bad snow storm that has shut all roads or flights into the area. We drove for hours only able to see just in front of the car. I have failed more times than I have succeeded, I don’t fear failure.I fear not trying. Tomorrow we will try again.. Mathew17:20 @german_madrazo @reflex_nutrition @tongaskiteam
A post shared by Pita Taufatofua (Pita T) (@pita_tofua) on Jan 16, 2018 at 12:21pm PST

We drove for over two hours through this snow storm in an attempt to get to this last race. We were hoping that it would clear, it didn’t. ( see previous post)
A post shared by Pita Taufatofua (Pita T) (@pita_tofua) on Jan 16, 2018 at 3:04pm PST

Stuck inside due to a heavy snowstorm, trying to get some uphill technique training in… I should have kept his phone hidden in the fridge ! #TongaTongaLoveYouLonger #NeedNewFriends @yona_fena_garcia
A post shared by Pita Taufatofua (Pita T) (@pita_tofua) on Jan 18, 2018 at 1:04pm PST

They said to jump out for a quick photo in the Arctic Circle… Then they drove off! #NeedNewFriends @german_madrazo @yona_fena_garcia
A post shared by Pita Taufatofua (Pita T) (@pita_tofua) on Jan 18, 2018 at 2:37pm PST

On the last day of my Olympic qualification, at the end of the world, I said a little prayer before my race and then a miracle happened! 🙂 🇹🇴 TONGA IS GOING TO THE WINTER OLYMPICS! 🇹🇴 Mathew 17:20 -Faith
A post shared by Pita Taufatofua (Pita T) (@pita_tofua) on Jan 20, 2018 at 2:23pm PST