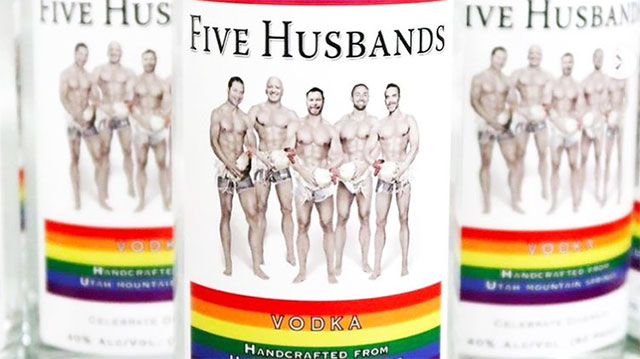 While Utah has long been considered a conservative state in regard to social issues and especially as the home of the Mormon Church, I was very pleasantly surprised to learn about a Odgen’s Own, an award-winning independently owned distillery in the state welcoming Pride 2021 with a brand-new, special-edition label for its Five Husbands Vodka.

The 2021 Five Husbands Vodka bottle is available for customers at the Ogden’s Own Distillery store with proceeds going directly to Equality Utah and the Utah Pride Center, two charitable organizations that support the Utah LGBTQ+ community.

As part of the distillery’s ongoing commitment to celebrate Pride all year long – not only during Pride Month – the new Five Husbands bottle features five members of the Utah LGBTQ+ community on the label.

Each 2021 “Husband” is well regarded for using their creativity, influence, and talent to build towards a better, more inclusive tomorrow.

The 2021 “Five Husbands” featured on the label represent a broad range of professions and areas of expertise, but the common thread binding each Husband is that they are all Utah locals that are passionate about representing the LGBTQ+ community and spreading the message of inclusiveness on as large of a stage as possible.

• Johnny Hebda – Johnny is a jack of all trades. A Nashville, TN native that has lived in Utah since attending BYU following the completion of his Mormon mission, Johnny currently serves as VP of Sales for AMP Smart, one of the nation’s fastest growing smart home companies. Additionally, he is a professional actor, model, director, and producer who is passionate about channeling his showbiz chops into social causes.

• Georgios Spiliopoulos – aka “DJ GSP,” Georgios is a native of Athens, Greece who has been a professional DJ for more than 15 years. In addition to being a DJ and music producer, Georgios is an event organizer and promoter, graphic designer, and record label owner. He has lived in London, Rio De Janeiro, Los Angeles and now makes his home in Salt Lake City.

• Rob Moolman, Ph.D – Rob is the Executive Director/CEO of the Utah Pride Center, a role he has served for more than three years. Among his many accomplishments with Utah Pride is establishing the SAGE program, which offers services for aging members of the LGBTQ community. A longtime friend of Ogden’s Own, he has partnered with the distillery on several occasions through the years to engage the community in LGBTQ+ events, causes and initiatives.

• CJ Hamblen – CJ is a real estate professional and aspiring personal fitness trainer, currently working as a leasing agent in Midvale, Utah. Born in Dallas, TX and raised in Sugarhouse, UT, CJ is a true creative, a music lover, and secret comic book and superhero aficionado. As an ardent believer in bringing awareness to both the LGBTQ+ and black communities, CJ is eager to use the Ogden’s Own platform to accomplish this in Utah and across the nation.

• Troy Williams – Troy is the executive director of Equality Utah and serves as a lobbyist on Capitol Hill in Washington, DC, ensuring that state laws include and protect LGBTQ Utahns and their families. Before his current role at Equality Utah, Troy produced reality television, including the TLC series, Breaking the Faith, which followed teens in the Fundamentalist Church of Latter-Day Saints fleeing polygamy – making a partnership with the creators of Five Husbands (and Five Wives!) Vodka an ironic twist of fate.

“Since the beginning, Ogden’s Own has been about supporting the LGBTQ+ community here in Utah through not only our words, but our actions, and we feel that this is our strongest statement to-date,” said Steve Conlin, co-founder and CEO of Ogden’s Own Distillery.

“Each of our Five Husbands is equally impressive, not just because of their individual accomplishments, but because of their character and commitment to making Utah a great place to live,” Conlin added. “We’re humbled to honor such an incredible group of people through our new Five Husbands bottle and can’t wait to celebrate Pride 2021 by sharing their stories.”

Ogden’s Own has served as the official alcohol sponsor of the Utah Pride Festival for several years and once again will for Utah Pride 2021.

For more information regarding Ogden’s Own’s canned cocktails, future availability of the products, and updates on all of Ogden’s Own brands, please visit www.ogdensown.com.