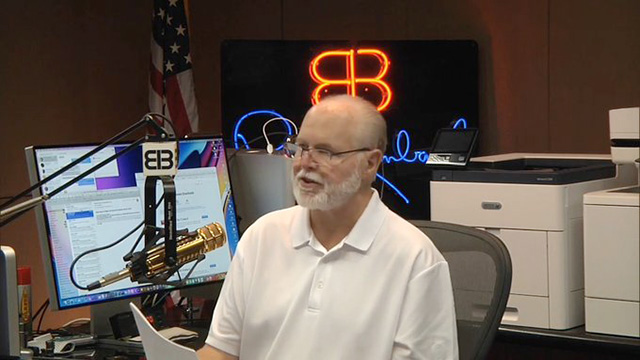 Folks are seeing Rush Limbaugh’s name trending on Twitter, and this is why. Sadly, I think I’m so used to Limbaugh’s grotesqueness that this doesn’t surprise me.

Limbaugh, currently on his fourth wife and an admitted opioid addict, would be ill-advised to pretend some ‘moral high ground’ in regard to Harris.

“The NBA has fired a freelance photographer because he insulted Kamala Harris. His name is Bill Baptist. He posted an image that read ‘Joe and the Hoe.’ H-O-E. Now, what do you think that’s about, ‘Joe and the Hoe’?

“Well, that takes me to the second story. ‘It’s no secret, but public knowledge that Kamala Harris slept her way up into California political life by being a very public escort and mattress for California Democrat kingmaker Willie Brown.’

“Now, some people read this story, ‘Mattress? Didn’t he mean mistress?’ No, I think they meant ‘mattress’ here.

“So we have two different stories here that are trading off the known fact that she was Willie Brown’s mattress, and that he has written about it, and that he has talked about how it propelled her — that he ended up being one of her mentors.”

Rush Limbaugh referred to Sen. Kamala Harris as a "ho" and "mattress" to millions of listeners, and somehow, GOP leaders who support him–including Trump, who awarded him the Presidential Medal of Freedom–will not be pressed about this.

Republicans in congress should condemn Rush Limbaugh's comments about Kamala Harris and advertisers should pull ads.

Let’s be very clear, Rush Limbaugh is a racist, sexist, misogynistic, vulgar, evil, hateful, moronic, hideous, pile of shit whose been married 4 times and was gifted the Medal of Freedom by a rapist criminal predator. And some were wondering why I felt nothing when he got cancer.

Rush Limbaugh is the same moral leader who flunked out of college, has had four marriages, & was an opioid addict ?? pic.twitter.com/6cy5k4C2b6