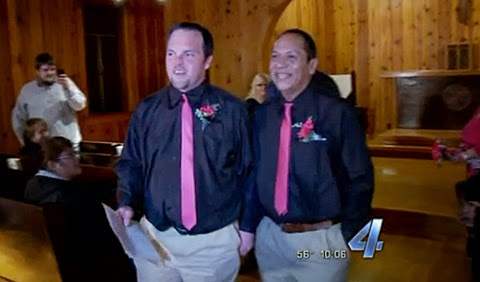 The third same-sex marriage has been celebrated in Oklahoma thanks to Native American ancestry.

Darren Black Bear, a member of the Arapaho Cheyenne tribe, married his partner of 9 years, Jason Pickel. They were married by Darren’s father, who marched in the civil rights marches with MLK Jr.

In Oklahoma, a marriage license is available from the Arapaho Cheyenne tribe as long as both people be of Native American descent and live within the tribe’s jurisdiction. Nowhere does it specify gender.

Oklahoma City’s KFOR has the story:

After dating for nine years, Darren Black Bear & Jason Pickel Wedding were able to get married because Darren is part of the Arapaho Cheyenne tribe.

The ceremony was held in a sacred place on sovereign land on Fort Reno Post Chapel.

The couple made their way down the aisle to Darren’s father, a minister who marched with Dr. Martin Luther King Jr. during the civil rights movement.

They exchanged vows, rings and then prayed for blessings from above.

While the couple was overjoyed, not everyone was celebrating.

“I find it kind of sad that this tribe is not willing to recognize what 75 percent of the voters of Oklahoma declared years ago, that marriage is a union between one man and one woman,” State Representative Sally Kern said, (R) District 84.

“Those of us who are Christians, who believe the Bible, are we going to have to give that up to satisfy the minority group that wants to redefine marriage,” Kern said.

The couple addressed the opposition.

“We heard some of the negativity but we have had far more support from people than anything else,” Pickel said.

He had advice for other couples who aren’t part of the tribe.

“I think they could go to another state, get married and spend their tax dollars there since Oklahoma doesn’t want same-sex marriage right now.”

Darren said he believes the Sooner State will one day legalize marriages like his.

“You just have to keep dreaming and hope that day will come,” he said.