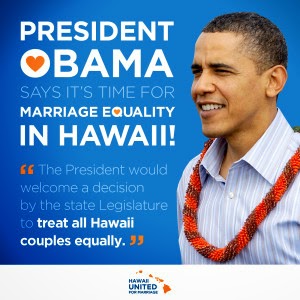 The White House has released a statement expressing the president’s support for the passage of same-sex marriage in his home state.

A White House spokesman said Tuesday that Hawaii-born President Barack Obama would welcome a decision by the state Legislature to approve marriage equality:

“While the president does not weigh in on every measure being considered by state legislatures, he believes in treating everyone fairly and equally, with dignity and respect,” Shin Inouye, a White House representative, told the Honolulu Star-Advertiser. “As he has said, his personal view is that it’s wrong to prevent couples who are in loving, committed relationships, and want to marry, from doing so.”

Should the legislation, having passed in the state Senate and now before the House, get the required votes, it would head to the desk of Gov. Abercrombie who has stated he intends to sign the bill into law. Marriage equality could begin as soon as November 18th.