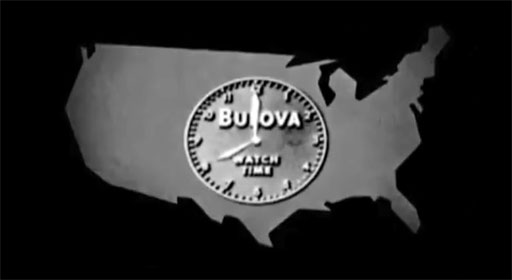 I’m fascinated by facts like this. What is so very normal for us today was once new, unusual and kind of a wonder.

Now we have DVRs to record our favorite shows (and bypass annoying commercials) but back in the early days of television commercials were extremely rare.

According to Ad Age, this was likely the first TV commercial to ever air – a :10 second image with a simple voiceover saying “America runs on Bulova time.”

“Evidence is mounting that [TV] will gain little headway for ‘the duration,'” Ad Age wrote in June 1941 following the FCC’s approval of commercial TV.

The next month, on July 1, Bulova aired what’s considered the first TV commercial. The grainy, shaky, 10-second spot ran during an afternoon Dodgers-Phillies game on NBC-owned WNBT. There’s a simple outline of the then-48 states splashed with the face of a Bulova watch. A voiceover from pioneering announcer Ray Forrest (re-enacted in the version above) says: “America runs on Bulova.”

The commercial cost Bulova about $4 and at best was seen by just a few thousand people who owned a TV set in the New York market where it aired.