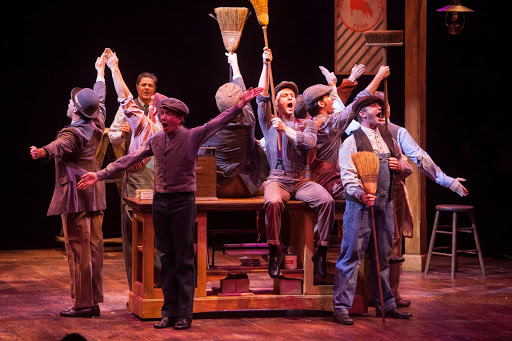 These past few weeks I’ve been working at Sacramento Music Circus, one of the premier professional summer theaters in the country, handling the choreographer duties for Hello, Dolly! starring the luminous Lynne Wintersteller.

This is my fourth season at SMC, and my second collaboration with the organization’s Artistic Director, Glenn Casale.

The process of assembling this fab team was really about as smooth as you can get. The principals are all top notch New York City based actors, and the dancers (my primary connection) were a dream. The day after I would give notes, you could see the info digested, processed and applied. Everything just kept getting better.

As a choreographer my biggest challenge was taking my 20 years of experience with Hello, Dolly!, utilizing primarily the original choreographic ideas of the great Gower Champion, and adapting those intentions into a production that plays in the round. Also, while I adhere to the Champion style, I did create new steps in several sections to further the storytelling.

For example, a few of the sections of the “Waiters Gallop” are completely brand new because I really wanted to focus on what the text says about the waiters of the Harmonia Gardens restaurant – that they are “the fastest waiters in New York.” Often, the “Gallop” gets treated a bit like “circus” tricks for no reason other than to be athletic or showy. I wanted every section to hone in on the idea of speed and skill.

Also, most productions switch out lots of props during the 7 sections of the “Waiters Gallop.” But when doing Dolly in the round, offstage prop tables would be located up the 100+ feet aisles. There was no time to run the male dancers up and down the aisles. So, I went back to the foundation of what we were trying to communicate and, using Gower Champion’s style and vocabulary, built new sections with the emphasis on true dancing.

For more info head over to Sacramento Music Circus’ website. If you really want a terrific all-American way to start your 4th of July weekend, this is really the ticket.

Here’s a bit of what the critics said:

From the Davis Enterprise: “With direction by Glenn Casale, choreography by Randy Slovacek and costumes by Marcy Froehlich, this production is just stunning. Each of Dolly’s musical numbers is a show-stopper, perhaps most of all “Before the Parade Passes By,” an amazingly choreographed number that ends Act 1. The dancing of the six waiters in the Waiters’ Gallop is stunning and when Dolly makes her entrance to the title song, well … you know you are seeing classic theater.”

From Sacramento Press: “Among the musical highlights are the songs “Before the Parade Passes By,” “It Only Takes a Moment” and, of course, the title tune. Several dance set pieces are outstanding, especially “Elegance” and “The Waiters’ Gallop,” which features some pretty amazing coordination. The choreography is by Randy Slovacek and the striking costumes are by Marcy Froehlich. Glenn Casale, who in his 20 years with Music Circus and Broadway Sacramento has directed more than 50 productions, creates joy in bringing this delightful show to life. His direction is perfection.”

From Sacramento365.com: “While
the choreography and staging was exemplary throughout, the performances
of “The Waiters Gallop,” and “Hello, Dolly!” were my favorites. As the
cast sings and dances across the stage, the members of the audience
around me lit up with excitement and cheer. When a production has the
power to do this you know it’s a great show. I can’t recommend Music
Circus’ production of Hello, Dolly! enough.”

From BroadwayWorld: “Glenn Casale’s direction and Craig Barna’s musical direction hit a sweet spot with an ensemble whose vocals blend beautifully and an outstanding orchestra. Inventive choreographer Randy Slovacek also takes full advantage of the athletic cast and the Music Circus aisles and round stage in routines that ultimately steal the spotlight in a lively and enthusiastic production.”

From the Sacramento Bee: “The Music Circus at its best – as it is with the current “Hello Dolly!” – casts a warming glow. A title as venerable and familiar as “Dolly!” feels known, but what sure-handed director Glenn Casale’s lustrous production accomplishes is not reinvent the classic but reveal its greatness.”

Here’s some production photos (click pics to enlarge) and a video montage of the show. You can see some of my work there in “Put On Your Sunday Clothes,” “Dancing,” “Before The Parade Passes By,” “The Waiters Gallop,” and the title tune “Hello Dolly.”