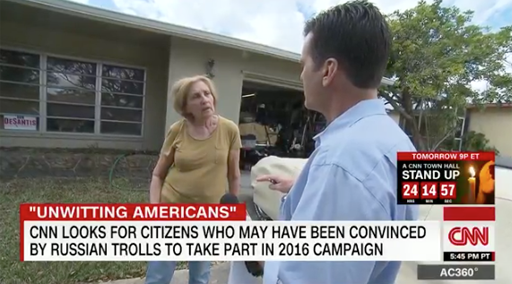 In light of the facts laid out in Special Counsel Robert Mueller’s indictment of 13 Russian activists meddling in the 2016 election, CNN went out to speak to Trump supporters whose Facebook pages actually interacted with identified Russian “fake Trump” social media accounts.

It will come as no surprise that no amount of evidence will convince these “geniuses” that they were played by the Russians.

Florine Gruen Goldfarb runs the Team Trump Broward County Facebook page, which posted numerous times about events that were promoted and encouraged by the Russians. Speaking to CNN on Sunday, she said she didn’t believe she was influenced by the Russians and said she thought that Friday’s indictment was a ploy to distract from the FBI’s mishandling of tip-offs it had received about the Parkland, Florida school shooter.

One reason Goldfarb was skeptical about the claim of Russian involvement goes back to the Russians’ tactics: They were not faking rallies or supporters, but trying to prompt real Americans who already backed a cause to turn out in support of it. Goldfarb attended the Fort Lauderdale “Florida Goes Trump” event. She told CNN that she knew all of the people there, “they were at my meetings. They’re all Trump supporters.”

Watch below as Goldfarb absolutely denies the possibility that she might have communicated via Facebook with Russian disruptors.